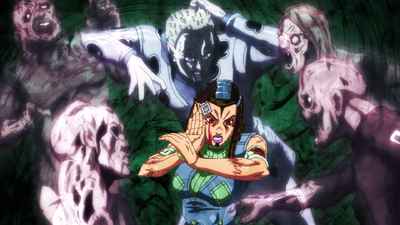 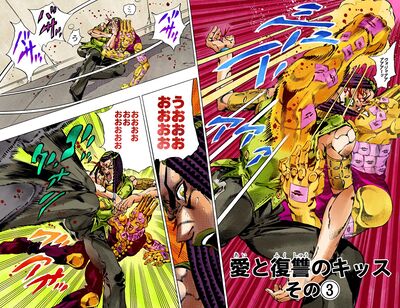 Ai to Fukushū no Kissu

Kiss of Love and Revenge (愛と復讐のキッス, Ai to Fukushū no Kissu) is the eleventh story arc in Stone Ocean.

It narrates Ermes's brutal revenge on her sister's murderer Sports Maxx, who unfortunately uses his Stand Limp Bizkit to resurrect himself.

In the prison cafeteria, Jolyne and Foo Fighters talk with each other as they get their meals. When Jolyne asks where Ermes has been, F.F. tells her about why Ermes came to prison in the first place. Ermes had a sister who was ten years older than her, Gloria Costello. She had inherited the Costello family restaurant and ran it with her sister. At seventeen, not wanting to be a part of the restaurant business, Ermes ran away one night. Gloria ran after her, but along the way accidentally witnessed a murder. In order to protect her sister she called the cops. A few weeks later Gloria's body was found in a gutter. Due to the only witness being dead, the murderer, Sports Maxx, could only be charged with tax evasion and aggravated assault. Ermes wasn't satisfied with a five year sentence, so she entered the same prison in order to find him and enact her revenge.

In the prison chapel, Sports Maxx converses with Father Pucci. Ermes watches from a distance. As he leaves the chapel, Ermes follows. For the past few days Ermes has been following Maxx's every move. As she follows Maxx, Jolyne and F.F. follow her but decide to stop, believing this to be Ermes's own fight. Maxx walks by a pipe with a picture of Gloria stuck on it with a sticker. When he grabs the picture, two duplicate pipes merge together with Maxx inbetween. Ermes walks over and explains herself to Maxx, using Kiss' stickers to further trap Maxx. On a table in the nearby taxidermy room, a taxidermy bird falls over. An invisible being flies over to Ermes and starts attacking her. It puts up a good fight but Ermes manages to defeat it with her Stand. Ermes deduces that Maxx must have obtained a Stand from Whitesnake, and wonders what the villain had planned for him. Maxx remains trapped in the pipe, slowly drowning. She notices the table in the taxidermy room has flipped over. She sees an alligator corpse and quickly making the connection runs away. She leaps and hangs on to a pipe on the ceiling. Hearing the commotion, Jolyne and F.F. come to check out what is going on. The gator charges at them and bites off F.F.'s leg. Jolyne uses Stone Free to fight the invisible zombie gator, utilizing strings to discern its location. Jolyne doesn't stand a chance so F.F. sacrifices her arm to shoot the gator in the mouth. With the gator destroyed, Ermes checks on Sports Maxx, to see he has crawled out of the pipe. Feeling thirsty, Maxx walks over to a prostitute. She gets upset when a man seems to touch her without paying. Maxx beats up this person, but the prostitute isn't able to see him. She begins to freak out as she isn't sure whats going on. When Maxx tries to inject drugs into his arm, he realizes that he had died and his Limp Bizkit turned him into an invisible zombie. Upon discovering this he promptly devours the prostitute's brain. In search of Maxx, Jolyne and Ermes come across the dead girl and fight off her zombie. The two realize that they are in the prison mausoleum so Jolyne creates a string barrier to fend off the horde of invisible zombies. Certain that Maxx will try to kill her himself, Ermes stands adamantly in the center of the room. Zombies grab and bite Ermes all over, but her prediction was right as Maxx goes directly for her head. By using Kiss to duplicate her own head, Ermes manages to survive the attack and finish off Maxx with a flurry of punches.[1]