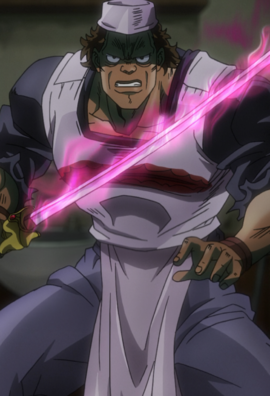 Khan (カーン, Kān) is a minor character featured in the 3rd part of JoJo's Bizarre Adventure, Stardust Crusaders. He is an ordinary barber and is possessed by Anubis as he gives Polnareff a shave. Consequently, he battles both Polnareff and Jotaro.

For a barber, Khan possesses a rather imposing stature. He has very broad shoulders and a muscular build. He has brown skin, black hair and bold lips, all typical features of real-world Egyptians. He is only seen wearing his barber uniform, which consists of a simple light blue tunic and a small hat that covers the crown of his head.

Not much is known about his personality, aside from being very curious and possibly having an appreciation for blades. When Polnareff tells him to put the Anubis Sword someplace safe for the duration of his visit, he unsheathes it out of curiosity because he believes it to be very beautiful and well crafted never knowing of the evil within the sword.