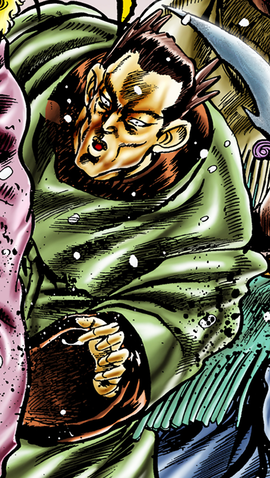 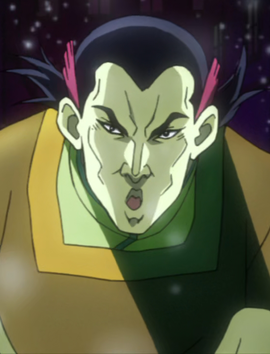 Episode 2 - A Letter from the Past

Phantom Blood (PS2 Game)
“
Aiyaaah!! You think you're so high and mighty?! My Oriental Mystery Chinese Kempo Kick will send you flying to the netherworld!
”
—Kempo Fighter, Chapter 8: The Stone Mask, Part 1

He is a hoodlum and one of Robert E. O. Speedwagon's friends living in Ogre Street.

Kempo Fighter is a muscular man of average height with a long chin and sunken cheeks. He has neck-length dark hair with a widow's peak

and wears long hair clips behind his ears. He wears a traditional Chinese martial arts uniform.

Little is known of Kempo Fighter's personality, but he is prideful of his self-proclaimed martial arts techniques. Like his friends, he has a rowdy nature and is violent towards strangers who enter his gang's territory.[1]

As a thief from the dangerous Ogre Street, the Kempo Fighter mostly goes for his victims in a combined attack with his friends. He claims that he has mysterious oriental martial arts.

The Kempo Fighter does a flying kick toward his opponent. According to him, it sends his opponents flying to the netherworld. However, it can easily be countered if the enemy is not caught off guard. An Asian man from Ogre Street who joins Robert E. O. Speedwagon's gang at some point. He ambushes Jonathan with Speedwagon and Tattoo during Jonathan's journey to find a cure for his father's illness. Although he is prideful of his oriental techniques, Jonathan quickly defeats him with a backhand punch to the face. Noting his heritage, Jonathan asks if he knows of an oriental shop nearby that sells poisons.[1]

Later, he drives a steam car

for Speedwagon to go visit Jonathan in the hospital. Tattoo and another friend of theirs joins along. While walking toward the hospital entrance, Speedwagon falls down because he forgot to take his cane which he needed due to his injuries. Speedwagon yells for the Kempo Master to quickly hand over his cane.[2]

In the end, Kempo Fighter appears along with Tattoo, Speedwagon's friend, Poco, Poco's sister, Straizo, and Tonpetty to see off Jonathan and Erina as they leave for their honeymoon to America.[3] 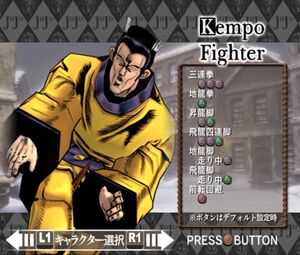 File:KempoFighterPS2.jpg
Kempo Fighter appears as an enemy in Chapter 05, alongside Speedwagon and Tattoo. He can be played as in one Extra Battle Mode fight, though his moveset is limited.
Kempo Fighter
Commands
Name

The Kempo Fighter appears in the game as part of Speedwagon's moveset and exclusive Style titled Ogre Street (, Ougā Sutorīto). When utilized, Speedwagon will temporarily summon Tattoo and the Kempo Fighter, who will follow him until they are either ordered to attack, hit, or separated far enough from him.

Kempo Fighter also appears on his own as an enemy character.