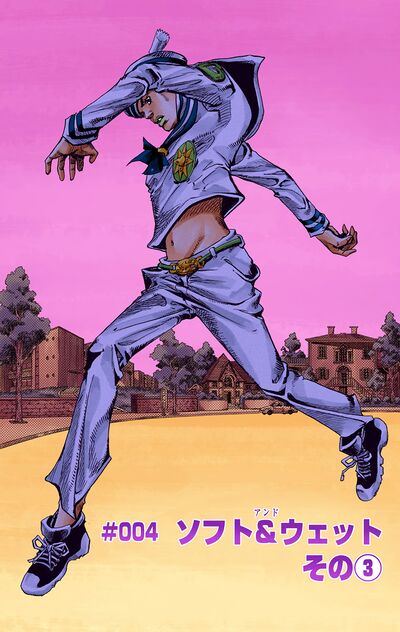 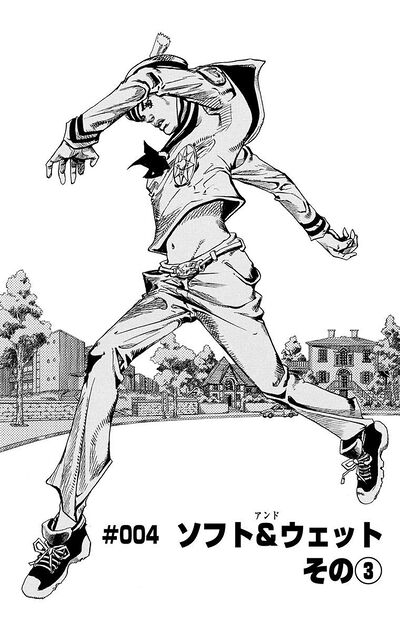 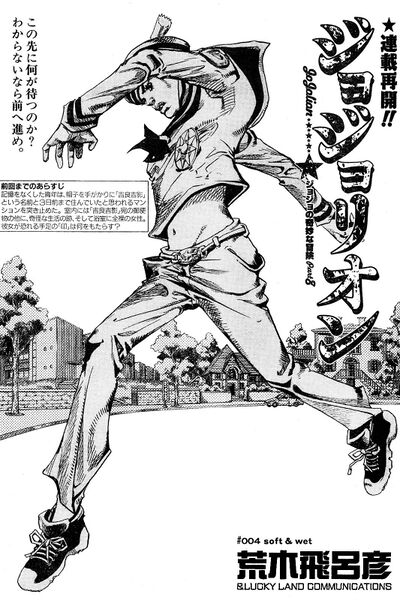 Outside, Yasuho runs into a group of friends who were on their way to the Higashikata Fruit Company. They invite her to come along, but she dismisses it. After waving their goodbyes, Yasuho then weeps. She recalls the man she met earlier and his innocent behavior. She thinks to herself that such an innocent amnesiac isn't the type of man to do the sadistic things depicted in the photo album. She then thinks about the possibility that the man she found was not "Yoshikage Kira", and perhaps there is another person with the name.

Back at the apartment, the man is about to wipe his strange mark off with a towel, but the naked woman suddenly yells at him not to touch it. That is when the protagonist realizes the bath towel is trapped with needles. He continues to ask her what her name is, but then the woman shushes him. She reminds the protagonist to keep quiet, and that the man should not let the attacker stand directly above them, otherwise the man will surely get marked.

The protagonist continues demanding answers, but then the naked woman dips herself into the bathtub. As she lowers herself, she tells the protagonist that she wanted to grab a towel instead of going into the tub, and then is completely submerged. At first, the protagonist believes it to be her own doing, but when he tries to lift her out he notices her sudden gain in weight; at that moment, his marked limbs act on themselves. He realizes both he and the woman were under the effect of the enemy's ability. He finally manages to save the woman from drowning by draining the bathtub, but cuts his right hand in the process because the stopper's chain was sharpened. His hand becomes branded, leaving only his right foot free.

Coughing out the water, the girl explains that she lives in Tokyo, and that some time ago she was kidnapped while on vacation in Morioh. She repeats her explanation of not wounding themselves and letting the enemy stand directly above them, and continues urging the protagonist to escape.

The protagonist demands the woman to say his name, asking her if he's Yoshikage Kira or not. However, the woman doesn't know. She explains that three days ago he was held captive with her but then escaped, and when he came she thought he returned to save her.

She is about to tell the protagonist the name of their enemy when she is manipulated into pulling out her tongue and grabbing a razor to cut her tongue off. After a brief struggle, the protagonist manages to grab the razor from her hand, but then is puppeted into trying to slash himself with the razor he's holding onto. He tries to stop his hand by pressing his unmarked foot on it, but to no avail. All the naked woman could do was watch in horror as the protagonist tries to avoid his controlled hand with the razor.

Then the protagonist manifests and unleashes his Stand, Soft & Wet. He explains its ability is to steal something from whatever is touched by one of its bubbles and uses its ability to remove any sound that would emit from the walls. Without sound, the Stand user above is unable to pinpoint anyone's location below him. The hero then uses his Stand to destroy a large portion of the wall without making any noise. He and the naked woman listen to the receding footsteps above them, and climb out of the bathroom into the other room. Trying to predict his enemy's next move, the protagonist heads toward the balcony of the apartment for safety.