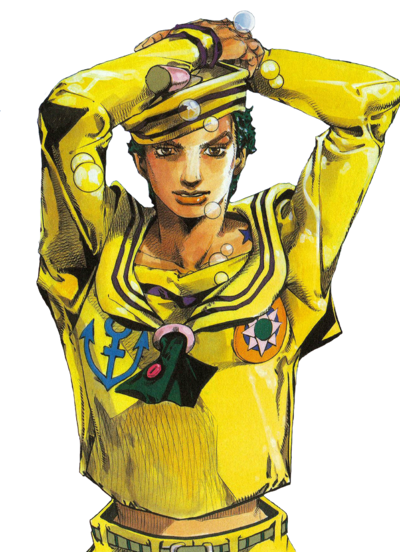 All-Star Battle
For other usages of the name "Josuke", see the disambiguation page
SPOILER WARNING: Part 8 spoiler details may follow.
“
Who the hell am I? (オレは一体何者なのか？Ore wa ittai nanimono na no ka?)
”
—Josuke Higashikata, JJL Chapter 17: The Lemon and the Tangerine

Josuke Higashikata (東方 定助, Higashikata Jōsuke)[a] is the main protagonist of the eighth part of the JoJo's Bizarre Adventure series, JoJolion, and is the eighth JoJo of the series.

He eventually learns that he did not exist until Josefumi Kujo and Yoshikage Kira fused together with the Locacaca fruit, and is neither one nor the other. Josuke is a Stand User and retains an upgraded version of Josefumi's Soft & Wet.

He wears a tasseled "Dixie cup" sailor cap (in multiple illustrations, it is adorned with the same palm insignia as Jotaro Kujo's hat). The brand of his hat is "SBR" (a reference to the Steel Ball Run race). He wears a sailor suit cropped above the navel with a wide neckline that exposes his birthmark, a neckerchief with a button resembling a slotted screw head, large emblems of an anchor on his right side, and a compass rose on his left, fitted pants with a belt, and a pair of high-top athletic shoes (which he mentions to have cost him 7,980 yen). His underwear reads "JOJO" around the waist. 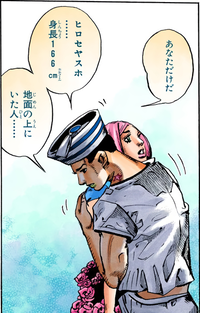 Josuke is afflicted by extensive retrograde amnesia, lacking memory of himself or events prior to meeting Yasuho Hirose, while still being able to retain various degrees of knowledge.[8] As such, Josuke is driven to discover who he was by investigating the circumstances of his presence on the beach prior to having been saved by Yasuho. That goal occupies nearly all of his activities, and no action on his part is made without attempting to reach the truth. That drive is sufficiently strong that he was willing to interrupt a rare moment with his love interest Yasuho to investigate Karera Sakunami.[9] After learning about his past identity, Josuke set for himself the new goal of retrieving the Locacaca branch and using the fruit to heal Holy Joestar-Kira.[10] He still demonstrates the same steadfastness in investigating the fruit and the whereabouts of the Locacaca Organization, with the addition of deferring more to Rai Mamezuku's opinions, deeming the plant appraiser's expertise about the fruit worth listening to. His determination to reach his goals is best illustrated when he willingly steps into a rain made deadly by Satoru Akefu's Stand, letting his body be pierced by raindrops, including his head, just to reach the hospital.[11] 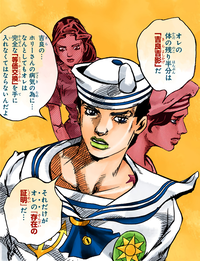 Josuke seems to have retained certain traits from both of his original identities. At times he displays strong emotions like Josefumi while also being able to analyze situations and strategize like Yoshikage. However, Josuke ultimately considers himself separate from both, being neither Kira nor Josefumi as he doesn't have memories from either man nor did anyone from Josefumi's past look for him. It causes him to question what he really is and consider his identity to be nebulous.[12] Nonetheless, he felt a strong sadness when he first saw Holy Joestar-Kira, meaning he has also retained subconscious memories strong enough to still feel an attachment to her.[13]

While Josuke can be violent at times, he also has a degree of restraint toward enemies he doesn't need to kill. On multiple occasions, he has asked members of the Higashikata family for permission before pursuing an enemy that relates to them,[14][15] and he even kept his promise to not harm Jobin while trying to get information about the Locacaca out of him.[16] However, Josuke is willing to defend himself and the people he knows from anyone who wishes to harm them. Josuke is not afraid to threaten to kill, and he indeed killed Tamaki Damo in cold blood in retaliation for threatening his adoptive family,[17] though his main goal of discovering his identity means that killing his aggressors is counterproductive. That killing intent is easily triggered when someone hurts Yasuho. Josuke has also proven to be proficient at manipulating people, notably Jobin with whom he would adopt a more nonchalant persona to seem harmless.[18] Apart from that, Josuke approaches his task calmly and methodically.

Josuke is relatively polite and has been shown to strongly value familial relationships. Being an amnesiac, Josuke places a great emphasis on one's family and legacy, wishing to learn his own past. The fact that no one came looking for him while hospitalized deeply unnerves him, to the point he can shed tears at the thought,[19] and Josuke honors Norisuke Higashikata's adoption of him, considering himself a part of the Higashikatas.[20] When Karera rejects her own parents, Josuke comments that they would never get along.[21] He's not only willing to defend his adoptive family, but he strongly desires to cure Holy of her illness despite not having any memories of her. However, Josuke continues to suspect members of the Higashikata family of working against him. Josuke cares for Yasuho on a stronger level than even his family, and any threat to her well-being greatly angers him. In fact, during his battle with Yotsuyu Josuke is shown to possess a similar type of willpower to Johnny Joestar's "dark determination."[22] However, when it comes to his goals, Josuke is straight to the point and hardly tolerates any circling around the subject. For instance, he didn't hesitate to directly ask Norisuke if he killed Yoshikage Kira, forcing the latter to explain his motives.[23]

Despite all this, Josuke also has a certain number of humorous quirks. He seems to be totally oblivious when it comes to mundane things while at the same time retaining an in-depth knowledge of animal and plant species.[24] Josuke prefers sleeping underneath a whole mattress rather than the bed sheets for "increased compression."[25] He also regularly spills food he enjoys.[26][27] During his earlier interactions with Yasuho, Josuke would pry at her breast size offhandedly, measuring it by sight (a trait that he probably gained from Yoshikage, as Holy was shown to possess a similar skill).[28] Josuke has also demonstrated a more childish side, implanting his hair into Joshu and Hato Higashikata for fun.[29] Whenever the mood is right, Josuke seems to have fun declaring his victory. He notably consciously poses after outsmarting the population of Shakedown Road[30] and also smugly claimed his win against Jobin in a stag beetle fight.[31]