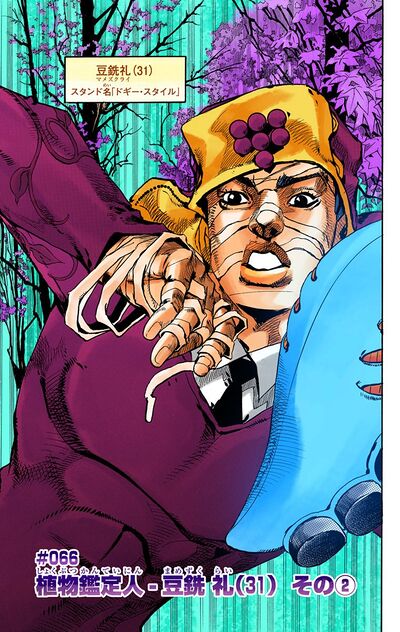 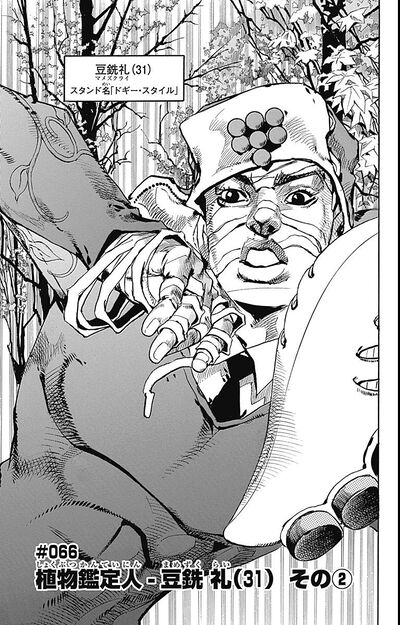 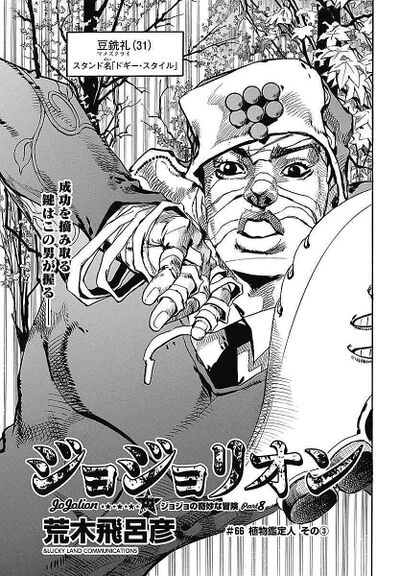 Yasuho compliments Mamezuku on his dessert, and the conversation shifts to Mamezuku's chairlift which contains many "rooms". The first pole contains his collection of analog records, the second pole being a library and winery at the same time, the third pole being a closet, and the fifth being the kitchen and dining room. She then asks about the orchard on the mountainside which she notices looks unkempt. Upset, Mamezuku explains that the bottom of the mountainside is left with all the weeds so the insects and disease flourish here and don't think about going up to the real orchards. Moreover the plants sensing the danger nearby supposedly get bigger and sweet. Although Yasuho is unnerved by Mamezuku's harsh methods, another mouthful of Romanoff gives Yasuho and Josuke back their joy.

Mamezuku then exposes the human tradition of agriculture, a 10,000 years old activity and the starting point of human development. Yet, Mamezuku explains, there was no advancement at all on the matter of "eternal life". The appraiser explains that there is still proof that life is perpetual, even at a cellular level where cells get replaced to maintain life. Mamezuku then theorizes that Josuke's miraculous condition may have attracted a new group of enemies who do not aim to merely sell the Locacaca to individual rich people, but reverse-engineer the process to an industrial level, which would bring unimaginable riches. However, Mamezuku has no idea of who would be behind the attack as many kind of powerful people would be after the hybrid fruit on the Higashikata estate. Josuke then asks what is in the fourth pole of the chairlift, and Mamezuku unveils his gym, complete with threadmill and dumbbells.

A couple of policemen arrive at the parking lot near the chairlift and see the trees surrounding the cars. Before they can call for backup, the two men are riddled with holes and reduced to flattened husks. Mamezuku spots the police car but not the officers as the enemy trees keep closing in on the three. While Mamezuku plans to get to the 8th pole where he can get a way to detect the Locacaca branch, a tree sneaks up on Yasuho and whips its branches to make Yasuho fall. Josuke manages to catch her but the trees then attacks Mamezuku. Josuke, Yasuho and Mamezuku then see small crystal-like Stands coming out of the tree and attaching themselves to Mamezuku's hand. The real enemy reveals itself. Bits of the tree's roots are shot upward, grazing Yasuho's leg which is then also covered in the enemy Stands. The Stands create holes on Mamezuku's hand and proceed to enter it while Josuke uses Soft & Wet to take them away from Yasuho's legs then destroy the tree.

Mamezuku uses his remote to start the chairlift again to get away from the tree and climbs back on the seat. A peeved Mamezuku reminds Josuke of his promise, which he just failed to keep by protecting Yasuho first while neglecting the appraiser's safety. Analyzing his wound, and noticing that the enemy Stands are melting the flesh from the inside, making the holes bigger, Mamezuku calmly summons his Stand Doggy Style and cuts away his left hand. Mamezuku then suddenly pushes Yasuho, who falls to the ground. Josuke is horrified that Yasuho is now in great danger while Mamezuku plans to observe the enemy's ability by using Yasuho herself as a sacrifice.

Author's Note
“
When I went to buy an electric lamp, I was told that the life expectancy of the lamp is when the LED ends.
”
—Hirohiko Araki
“
電気スタンドを買いに行ったらLEDが終わる時がそのスタンドの寿命と言われた。
”
—Hirohiko Araki