This article is a disambiguation page for JoJo/en

The following is a list of links to pages that might share the same title.
Please follow one of the disambiguation links below or search to find the page you were looking for if it is not listed. If an internal link led you here, you may wish to change the link to point directly to the intended article. 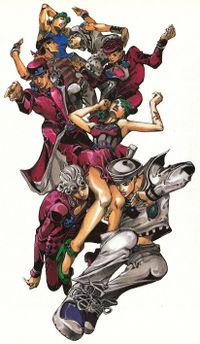 “
Jotaro Kujo... apparently, his friends at school took the "Jo" from Kujo and the "Jo" from Jotaro to nickname him "JoJo"... What a riot !
”
—Japanese Police Officer, Chapter 114: Jotaro Kujo, Part 1

JoJo (ジョジョ) is a nickname shared by each of the main protagonists of JoJo's Bizarre Adventure, derived from the recurrence of "Jo" in their names.

In the text of the manga during Phantom Blood and Battle Tendency, it is used most frequently in reference to Jonathan and Joseph Joestar.

Each of the protagonists is also descended from the Joestar Family, and as such all bear the Joestar Birthmark.

The following characters are not protagonists in the series, and some do not even belong to the Joestar bloodline. However, it's notable that their names are able to be shortened as "JoJo":

The name "JoJo" was derived at a Denny's

where Araki and his first editor, Ryosuke Kabashima, had their first meeting pertaining to the series.[1] The two had decided on "Jonathan" as the series' protagonist, however, Araki also wanted the initials to match in a way similar to the American filmmaker, Steven Spielberg

(S.S). They eventually landed on the name, "Jonathan Joestar" (J.J) and thus the nickname "JoJo" was born.[2]

Jonathan was rumored to be named after "Jonathan's Family Restaurant," however, both Araki and Kabashima confirm this was an urban myth that formed among fans back in the day. Araki had also brought up the name during a 2006 interview, but he claims the interviewer had mentioned it and he just went along with it by accident. Their later meetings during Part 2 and Part 3, however, were ironically at said Jonathan's restaurant.[3]