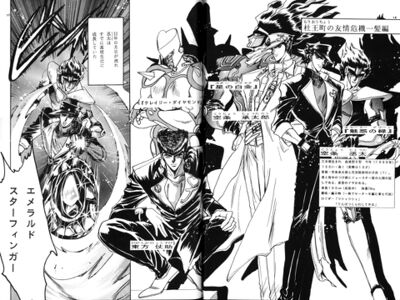 Morioh's Friendships in Danger (杜王町の友情危機一髪編, Moriō-chō no Yūjō Kikiippatsu-hen) is the fifth and final chapter of JoJo's Bizarre Married Life.

Ten years later, Jota has grown enough to be a sophomore in high school. He is technically ten years old but has the body of a sixteen years old boy. Additional info about Jota is also stated in his bio. It is revealed that Jota, at Kakyoin's request, had been visiting Morioh often to deliver packages to Jotaro. He quickly became acquainted with the town due to the frequent visits and soon found himself befriending Josuke Higashikata, Jotaro's uncle and his granduncle, during these visits.

Jota showcases Charmy Green's matured abilities and attacks to Josuke, showing its "Emerald Star Finger" and ability to unravel its legs to make a barrier. Josuke is intrigued by the Stand's assortment of abilities. Jota then shows off Charmy Green's ultimate attack, "Urya Urya Rush", the result of 10 years of fighting against his father. Josuke laughs, commenting that Jota's Stand is just like Star Platinum. He then compliments Jota, stating that he is living the dream by having Jotaro as a father. Josuke is jealous, explaining that he feels really good whenever he is with Jotaro and asks if Jota understands and Jota answers that he always just feels irritated. Josuke then asks another question, asking what kind of person Jota's mother is. Jota questions what he means by "what kind" but is interrupted by a voice he happily recognizes that calls to him.

It is Kakyoin, who's come to tell Jota that he has forgotten to bring the package he needed to be delivered to Jotaro, so he brought it himself instead. Jota is irritated that Jotaro is also there. This is due to his feelings of loving his mother but resenting his father, which he has been doing since he was a kid. A small note clarifies that Jotaro didn't greet Jota but did go to see Kakyoin. Josuke realizes that Kakyoin is Jota's mom, and he loudly questions Jota. Josuke exclaims that this is great, complimenting Jotaro with how he is raising a teenage son at his age and even more amazing that his wife is a man. Josuke then states their love really touches him.

In the final note, it is explained that even though Jota and Josuke are close friends, they just can't agree on the subject of Jotaro. This incident marks the time Jota first understood the fragility of friendships.