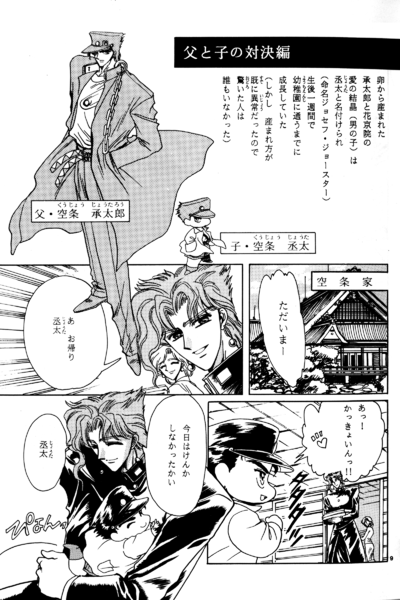 At some point, the child born from the egg has been named "Jota" by Joseph. Only a week after Jota's birth, he had grown enough to start going to kindergarten. Due to the already bizarre nature of his birth, nobody is exactly surprised.

Jota returns from kindergarten back home as Kakyoin is doing laundry with Holy. Kakyoin welcomes Jota back with a hug and asks if he didn't get into any fights that day. Jota says yes, but his expression otherwise says he did and that he pummeled them halfway to death. Kakyoin thinks to himself that Jota really is Jotaro's child. Jota then pulls out a picture he drew in kindergarten and shows it to Kakyoin. It is a drawing of Jotaro with the words "Stubborn" and "Sadistic" written on it. Incidentally, Jotaro also comes back with Kakyoin welcomes him. Jota and Jotaro glare at each other. Worried, Kakyoin tries to calm Jotaro down by saying that Jota is just a child. Angry, Jotaro attempts to use Star Platinum to attack Jota and Kakyoin restrains him like when Kakyoin had to hold him back from attacking Steely Dan.[2]

At that moment, Jota suddenly activates his Stand. At this moment, the others enter the room with Joseph asking Jota if he wants to play with his grandpa. They all spot Jota's Stand. Avdol waves his hand through the Stand, unable to touch it. Polnareff examines it and comments that the Stand looks like a green Star Platinum, pointing out how its legs are all unraveled. Avdol, Joseph, and Polnareff think that no matter how you look at it, the Stand is just a combination of Hierophant Green and Star Platinum.

Joseph decides they should name Jota's Stand and tells Avdol to give it a good name. Advol explains that they unfortunately used all the tarot card names, with the narration nothing that even in the original story of Stardust Crusaders, they started naming Stands after things unrelated to the tarot cards. Polnareff proposes to have Jotaro name the Stand as it should be the father's job to name it. Plus, Jotaro already made Joseph name the kid because he was too lazy to do it alone. Jotaro and Jota glare at each other before Jotaro walks over to the kitchen to bring out green dish soap, saying the name of the brand, "Charmy Green."

Joseph and Avdol are disappointed by the name but Polnareff thinks it's pretty good. Jotaro and Jota glare at each other again. Meanwhile, Kakyoin thinks that Jota is already bizarre enough for being a Stand User on top of being born from an egg. He questions if this child can grow up normally. The chapter closes out by exclaiming that, as people say, the child of a frog will end up being a frog, and by default, a Stand User's child will be a Stand User. The narration announces that Jota will begin the battle between father and son with his new Stand, Charmy Green.