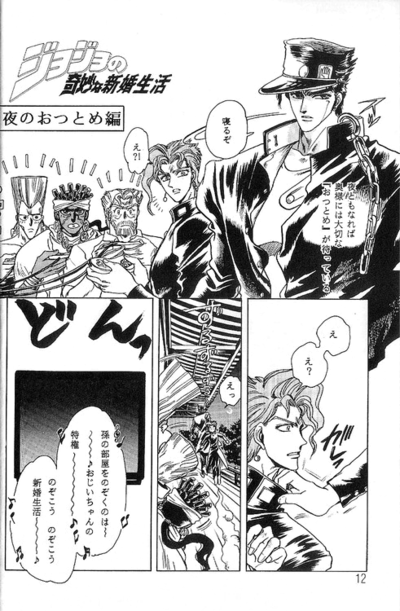 Working at Night (夜のおつとめ編, Yoru no Otsutome-hen) is the second chapter of JoJo's Bizarre Married Life.

The chapter starts by mentioning the idea that there is a job for the wife when it comes to night.

It is evening and the heroes are gathered at the house. Kakyoin, Joseph, Avdol, and Polnareff are playing video games but suddenly, Jotaro declares that he and Kakyoin need to sleep. Jotaro then drags Kakyoin away from the group by his collar.

Joseph starts singing a tune about the grandfather's privilege to see what his grandson is doing. Avdol disagrees with the idea of peeking but Joseph stops him and explains that it is his duty as a grandfather to "see his grandson off to happiness". Avdol is convinced and even says that since he's named Jotaro's Star Platinum, he also has that duty. Even Polnareff and Iggy agree with the notion. As Polnareff puts it, since they are friends, they have the right to see.

The group sits in front of the TV, using Joseph's Hermit Purple on the TV to peek at the newlyweds but immediately regret their actions after the vision appears. The next day, Jotaro walks in on the group nervously eating together. He forgives Joseph for watching him and Kakyoin last night as the group denies they did so. Joseph inwardly says to himself that he forgot Jotaro could sense him because of their Joestar blood. Jotaro scolds them and beats them up with Star Platinum while Kakyoin decides he is just going to go back to his own house for now.