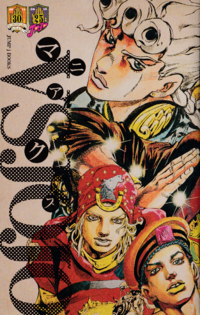 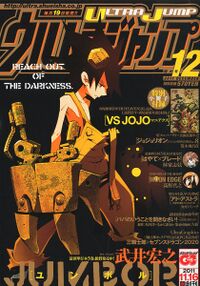 Interview with Kouhei Kadono, author of Purple Haze Feedback, published in the VS JOJO booklet. Included with the December 2011 issue of Ultra Jump released on November 19, 2011.

"Why did you choose Fugo as the subject for the novel?"

When it came to the subject matter, anything was allowed. I figured I could do basically anything within the "JoJo" universe. That said, writing a novel about Fugo was just really convenient for me. There were other candidates, but this was a story I just had to write.

"What were the other candidates?"

For example, where exactly did Stroheim die in Stalingrad? (laughs) The thought always entertained me, though I wonder if it's something readers would enjoy as well.

This other idea is a bit odd, but instead of directly competing with Araki-sensei, I wanted to try a "Futaro Yamada" style JoJo story. For Part 5, perhaps you could call it "Italian Ninja Scrolls".

"Much like the villains in JoJo, the ones in Purple Haze Feedback have a very powerful presence."

Araki-sensei drew the characters and Stands, but it gave me the most peculiar feeling. After seeing his material, I couldn't help thinking, "Did I write this?" That is, even though I had come up with the characters and Stands myself, I got a sense that they weren't really mine at all... I suppose this is the power of the original work. The novel also goes into further detail on their visuals, but I was surprised and delighted by how well Araki-sensei picked up on them.