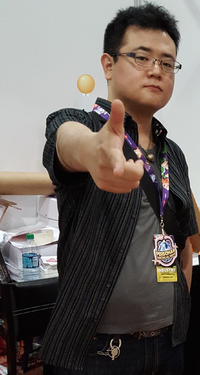 Interview with Naokatsu Tsuda, the Chief Director for the TV adaptation of JoJo's Bizarre Adventure. This is an interview with Tsuda at Anime Expo, Los Angeles on July 4, 2015, posted by Anime News Network.

ANN: What is the difference between your role as director and Kenichi Suzuki's role as "series director," as far as how things are managed?

Naokatsu Tsuda: The best way to think of it is not as co-directors, but one as the executive director and one as the actual director.

So he's in more of a producer position and you are the creative director?

We're both creative, but I have final say in everything.

How were you approached about directing a JoJo's television series and what was your reaction?

So, the story starts off with me being an employee at our production company, David Production. My previous work was directing Inu X Boku Secret Service and our Vice President, a man by the name of Kajita, asked me, "You like JoJo?" And I said "Yes!" And he said, "Okay, you're directing JoJo." That's it! Very easy.

When looking at the material, did you feel that there was much adaptation that needed to be made for language and references, since it is over twenty years old, or did you feel that it was timeless and you didn't have to change much?

The main adaptation needed for a modern audience would be in the visuals. If you look at the original JoJo's Bizarre Adventure, the lines are very detailed and I question if a modern viewer would be able to relate to these details. Also, we do need to simplify the lines for animation. So simplifying the lines was something we definitely prioritized. But the JoJo's graphic novels, over the years, have become something of an internet meme, or at least they are the source of a lot of internet memes. One thing we can do today that wouldn't have been possible 20 years ago is pick up on already established memes and see how we can pull those into the anime. Many parts of the series are already finished, so we are in a unique position today where we can do a wholesale retrospective on them. Also, modern audiences have a preference for higher-paced dialogue, so that's also different today from how it would've been adapted back then.

That's very interesting to hear about the meme culture of JoJo's. So you were aware of that stuff going in and you consciously said, "Oh we have to get this right, we have to make this feel classic for fans of the manga?"

One of my favorite things about JoJo's is the incredible sound design and music work on this show, both the soundtrack and the use of sound effects visually is very powerful. I feel like viewers can listen to this show and understand the story almost as well as seeing it. What was your philosophy going into the music and sound effects for the series?

The written words that show up in JoJo's is something that we call a "word effect." This comes directly from the manga, where if you look directly at the panel, the written sound effects are an integral part of the layout. Usually, when you animate a graphic novel, all those sound effects would be taken out, but that also changes the visual layout of the panel in translation to the screen. Now when you look at streaming culture today in Japan, especially when you look at websites such as Niconico, all the users just paste up their text reactions as part of the video stream, and that's part of the actual fan culture. My takeaway from that was younger audiences of today don't actually have any problem seeing written sound effects onscreen. So rather than changing the original manga layout, we wanted to incorporate that into the anime as well and use word effects in choice places for favorite lines and favorite sounds, perhaps sound effects that the viewer might want to shout out along with the show. So it's just thinking about things backwards and then making them work out. I don't think you actually need to be able to read the text, because it's more of a visual element than a language thing.

For the music, I really wanted to incorporate film-style music rather than something that resembled a variety show. When you use music in film, it's often set to a specific character or emotion or scene. In the first two parts of Jojo's, the music is really set to the scene and only once in a while is it set to the emotions of the moment. Part 1 takes place in 19th century England, which isn't exactly a place anyone has first-hand experience living through. So we used the music to establish a sense of history and location and period that we can relate to. Then we skip over to Part 2, which takes place in Art Deco America. So we had to establish something more stylish and pop in tone there. Since there's a graphic visual difference between Part 1 and Part 2, we wanted the audience to be transported 50 years forward through the music as well as the visuals.

What was the process for choosing the ending theme songs like "Roundabout" and "Walk Like an Egyptian?" Is this a tradition that you want to continue in future parts?

Well, those came from the author of the original graphic novel, Hirohiko Araki. They're all songs that he was listening to back when he was drawing the individual parts. Mr. Araki only listens to Western music because he doesn't understand English, so none of the lyrics come across to him as language, but as pure sound. So we got a list of these songs that he was listening to back when he was writing each part, and we chose songs for the closing animation based on which ones Warner was able to secure the rights for. It was up to Warner to actually do the negotiating. So if there is an anime production of the next part, we'll probably go by the same process. Traditionally, JoJo's Bizarre Adventure has been a gateway to learn about Western music for Japanese readers. For American fans, a lot of the music and names featured in JoJo's are more an acknowledgement of familiar artists, but this is also cause for Warner to be engaged in a lot of negotiations to secure those rights.

Yes, the names of these characters are changed in the official subtitles for American viewers. Vanilla Ice becomes Cool Ice, Oingo Boingo becomes Zenyatta Mondatta, and so on. The fans always know the real names, so they see that and sort of laugh at it. They feel like "what, are they afraid of lawyers?" How do you feel about American audiences being given changed names?

Well, I do think someone may have tried to err on the sensitive side of things in translation. When you look at characters like Oingo and Boingo, if the musical artist of the same name wasn't happy with the idea of being depicted as such comical characters, perhaps erring on the sensitive side might have been the right decision.

On that note, where did the Oingo Boingo Brothers song come from? It was a very fun surprise!

Part 3, Stardust Crusaders, is split into two halves for television airing. At the time, the music producer at Warner, Mr. Oomori, had asked if there was any scene-specific music that I wanted to have in the series. You might be familiar with a specific practice in Japanese animation where episode one and episode three are very important for a show's production. If episode one doesn't execute well, a lot of viewers will write off the show and never watch it. And you also need to have a new development or twist take place in episode three, or more established viewers will abandon the show. It's not such an issue with episode four onwards, but that's the unfortunately reality of the industry right now. The Oingo Boingo episode in question is actually episode three of Stardust Crusaders' second half, so we knew we had to make it stand out. Boingo is an enemy who uses manga as their gimmick, so for the ending we thought this could be the first and only instance of a character song. I thought it would be something that the viewers would be very happy to see. So I went to producer Oomori, he greenlit it, and the Oingo Boingo Brothers happened.

And the Hol Horse Boingo Combo as well! Now do you have a favorite Joestar or a favorite character? Not just in the three parts that are animated, but from any of it?

Well, since I just finished working on Stardust Crusaders, I'm most sympathetic to Jotaro. In part 4, my favorite is still Jotaro. As a high school reader of the manga, my favorite Joestar was… well, it's actually questionable if he's from the Joestar family, but he's the main character from part 5, Giorno Giovanna. He's actually Dio's child, but he inherits a very large portion of the Joestar family spirit.

You mentioned that the manga's art could be difficult to adapt to animation. What were your thoughts on adapting the manga's striking color design in a way that wouldn't be too overwhelming?

One thing that makes anime different is that once you establish the color setting, you can't change it, whereas there's no set color for a lot of things in the JoJo's graphic novel. Once we established the color setting inside the anime, we knew there might be a lot of fans who would object to the choice of colors. As a JoJo fan myself, I do really understand the kinds of things they would object to. So we decided on scene-specific coloring, so that the "set color" could still change depending on the specifics of the scene. Since the graphic novel doesn't actually have set colors for a lot of things, I think that was one way to take advantage of its style, while creating something that would be acceptable to fans.

One last question: JoJo's is filled with great moments of elation, and it must be exciting for the voice cast to do that sort of thing. What was the most powerful moment for you, vocally?

There's far too many to mention, but if I were to choose one, it would be the final episode of Stardust Crusaders, where Jotaro and Dio are having their showdown, and it is the battle of ORAORA and MUDAMUDA.

I knew the story, so I knew it was coming, but I was still surprised when Dio shouted "ROAD ROLLER!"