From JoJo's Bizarre Encyclopedia - JoJo Wiki
Jump to navigation Jump to search
This page is a translated version of the page Hair Clip and the translation is 6% complete. 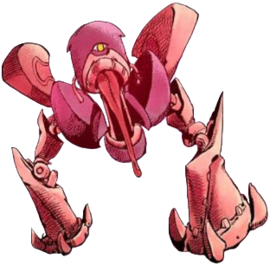 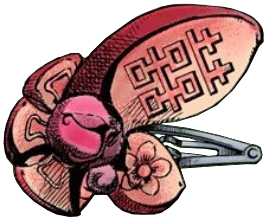 The unnamed Hair Clip (髪留め, Kamidome) is a minor antagonist featured in the eighth part of the JoJo's Bizarre Adventure series, JoJolion.

The creature is pink and disguises as a hair clip with a large crystal in the middle. Surrounding the crystal are five petals of various sizes, making the hair clip resemble a flower. One petal has a flower imprinted on it while the other longer petal displays the Chinese character for Double Happiness

(囍), which is a common decoration on traditional ornaments. The three petals on the other side of the crystal are smaller with a carinate

-shaped outline on them. 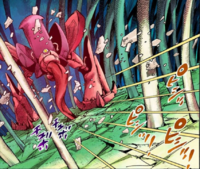 One Sunday in the autumn of 2005, Yasuho Hirose visits the flea market in Kotodai Park and thinks the hair clip is really pretty. According to the vendor, the hair clip was made in China during the era of Empress Dowager Cixi

of Qing. There was later a war and a Taiwanese girl owned it. The man sells it to Yasuho for 7,800 yen, which she considers cheap as she believes the hair clip to be authentic.