George Joestar is a mature man of average height who is slightly overweight. He has short dark hair and a small mustache.

His hair eventually greyed with age.

In the past, he was a strict father to his son, not only having forbidden a young Johnny from bringing an adopted mouse to the table, but then ordering that the mouse was drowned and shown to him. Because he was mindful of his reputation among the British, George was particularly severe when it came to gentlemany manners. George is was shown to be extremely sad and bitter over Nicholas' death.[1] 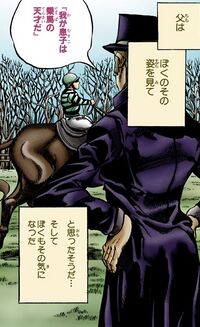 George Joestar I was born of a family with ties to the aristocracy which fell on hard times. However, George himself was famous and rich as a horseracer and then breeder, having won the Triple Crown

seven times and owning several farms with the facilities to breed racing horses. Although he settled in Danville, Kentucky, he made journeys to England with his family.[1]