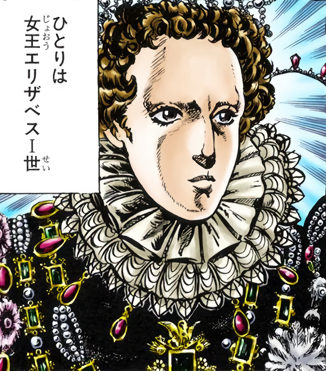 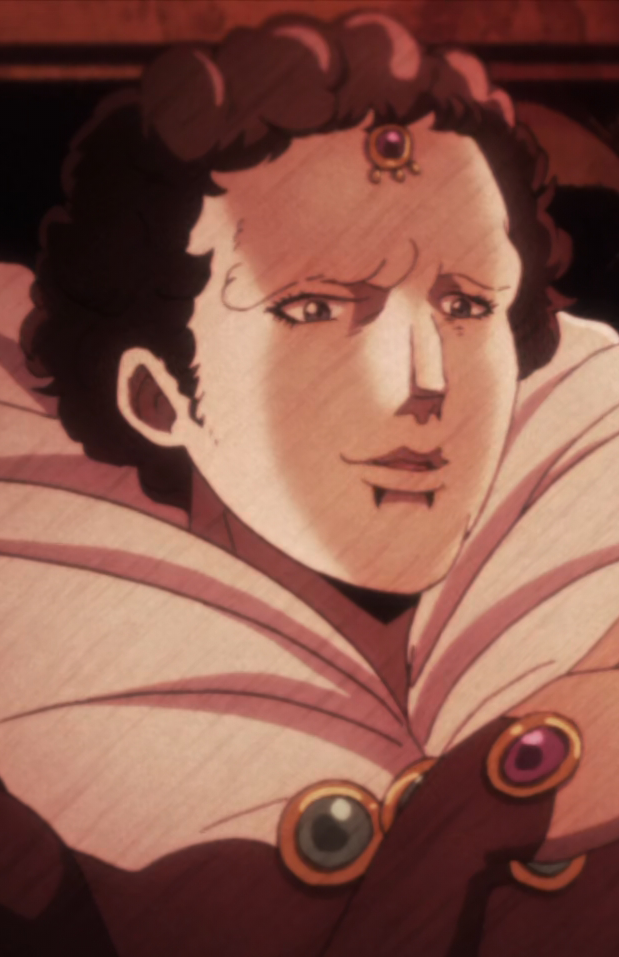 Episode 5 (Flashback)
“
Turn yourselves in, you two! Then and only then shall I spare Mary's life! (ふたりともただちに自首せよ！そうすればメアリーの命だけは助けよう！Futari tomo tadachini jishu seyo! Sō sureba Mearī no inochi dake wa tasukeyou!)
”
—Elizabeth I, Chapter 27: Tarkus and the Dark Knight Bruford, Part 2

Elizabeth I (エリザベスⅠ世, Erizabesu Issei) is a tertiary character featured in the first part of the JoJo's Bizarre Adventure series, Phantom Blood.

She is a queen of England and a monarch from the Tudor dynasty. In 1565, she battles her first cousin once removed, Mary Stuart, over the throne. Her betrayal of Bruford and Tarkus, two retainers of Mary, led to the two knights cursing humanity; Dio Brando uses this resentment to his advantage over three hundred years later when he revives them as zombies.

Elizabeth I has short curly dark hair that is shaved at the top of her forehead and also has no eyebrows. Her attire consists of a long gown with puffy sleeves adorned with various jewelry, along with a large ruff around her neck.

She wears several rings on her fingers. Her crown is also decorated with various rubies, sapphires, emeralds, diamonds, and pearls.

Elizabeth is a scheming woman and an opportunist who uses Darnley's death to her advantage. She doesn't hesitate to lie and murder her relative, Mary Stuart, to ascertain her claim over the throne. As she cannot defeat Tarkus and Bruford's armies, she uses deceitful tactics to execute them: she orders a woman to impersonate the imprisoned Mary after her execution, then demands the two knights' surrender in exchange for Mary's freedom.[1]

In 1565, Elizabeth and her first cousin once removed, Mary Stuart, begin battling over the throne. One day, luck strikes when a sudden explosion at Mary's home kills her husband Darnley. Though the true cause of his death remains unknown to history, Elizabeth accuses Mary of killing him, successfully turning the population against her. Nobles from across the land rebel against her. Except for the armies of Tarkus and Bruford, Elizabeth's army completely destroy Mary's soldiers.

Elizabeth captures Mary and takes her prisoner, and at some point she orders an executioner to behead her. Having promised the public that she wouldn't kill Mary, Elizabeth employs an impersonator who remains confined to solitude in a tower. Elizabeth uses this impersonator to trick Tarkus and Bruford into turning themselves in to free Mary. Before the two knights' executioner kills them, he points to Mary's head on the ground, revealing that he had already killed her.

Angered by Elizabeth's betrayal, Tarkus and Bruford curse Elizabeth and all of her future descendants before their deaths. Over three hundred years later, Dio takes interest in the knights' story and revives them to exact their revenge against the world.[1]