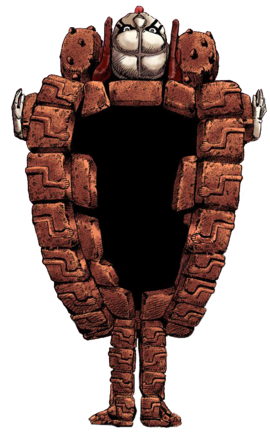 JJL Chapter 67 - The Plant Appraiser - Rai Mamezuku (31), Part 3
“
It moves by making the soil itself into a caterpillar track... Thus, there's barely any surface-level vibrations and no visible remnants of where it's dug! And on top of that, it protects its rider!
”
—Rai Mamezuku, JJL Chapter 68

Doremifasolati Do (ドレミファソラティ・ド, Doremifasorati Do) is a minor antagonist featured in the eighth part of the JoJo's Bizarre Adventure series, JoJolion, specifically in the "The Plant Appraiser - Rai Mamezuku (31)" story arc.

Doremifasolati Do is described as a Rock Animal[1] with a caterpillar-like body.[2] Its face vaguely resembles that of a dog or bear with the tongue constantly sticking out. Its head sports several grooves, having deeper grooves extending from its eye-sockets. The rest of its torso is made up of several flat rectangular stones, adorned with designs resembling human arms. These flat stones provide excellent defense from attacks and can be shifted rapidly like tank treads to mobilize underground.

On each side of Doremifasolati Do's torso are two stones that are topped with spinning rock-like human hands.[2] Doremifasolati Do also has a tail in the shape of humanoid legs[2] that is made up of the aforementioned stones, allowing it to stand when above ground. Its torso lacks any internal organs, instead being hollow. This functions as a makeshift cockpit, allowing a person to hide within its body like a shell.

In the colored manga, Doremifasolati Do appears brown with the spinning human hands and face appearing white with black markings and a red tongue.

Doremifasolati Do displays a very low level of intelligence[2] and doesn't exhibit any notable personality traits. It follows Urban Guerrilla and protects him from harm, implying a sense of loyalty and basic intelligence. Aside from this, Doremifasolati Do has yet to show the ability to speak.

It's mentioned that its diet may consist of insects or roots inside the ground, or possibly the dirt itself. It uses its nose to sniff around and tongue to lick objects.[2]

Doremifasolati Do can be ridden like a tank and is capable of traveling underground, controlling and shifting any trees in its path. Its primary weakness is water as well as urban or industrialized locations where it is heavily impeded by concrete covering the soil.