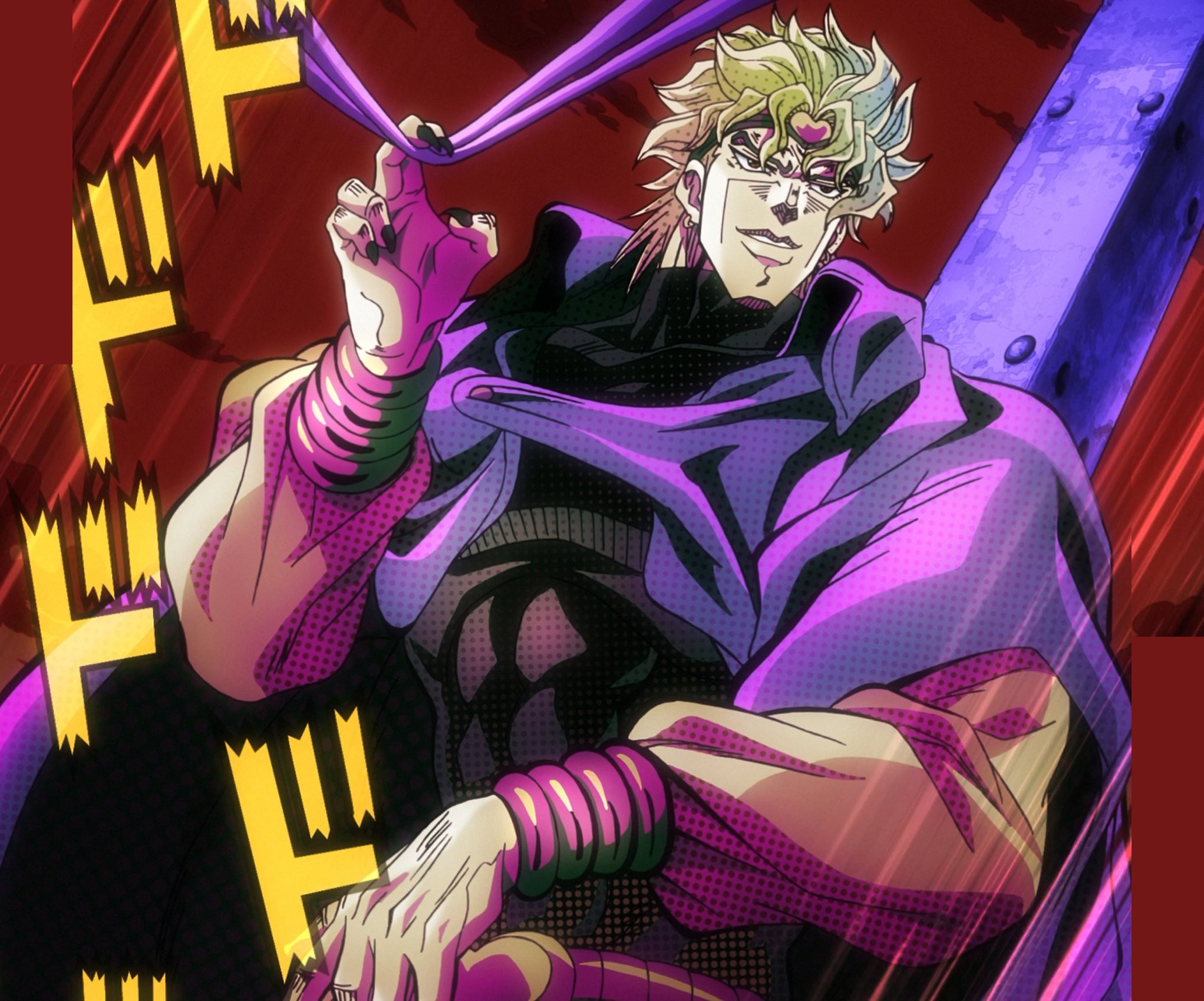 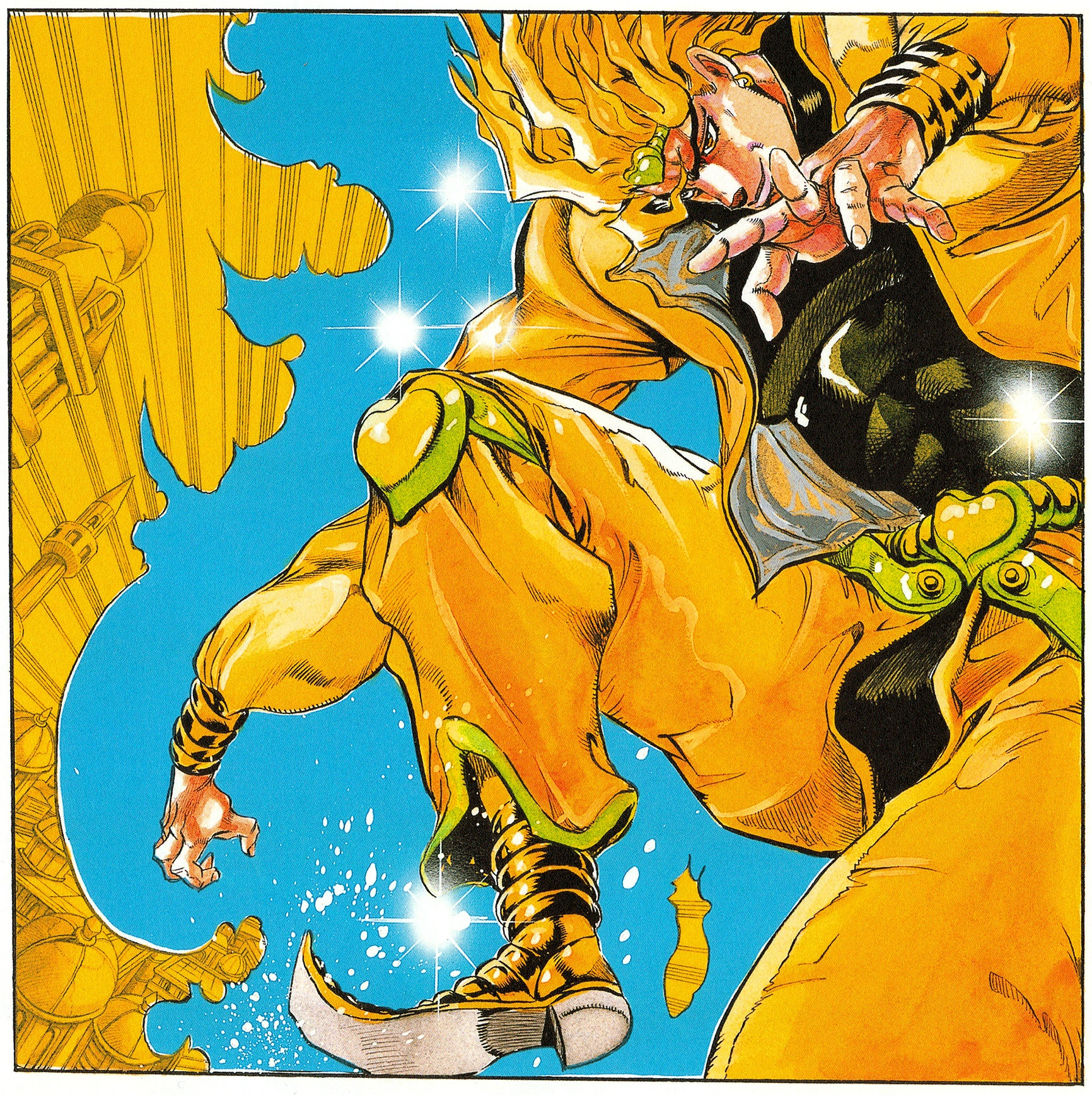 DIO's World (DIOの世界, DIO no Sekai) is the twenty-seventh and final story arc in Stardust Crusaders.

It narrates the climactic battle in the streets of Cairo between the Joestar Group and DIO, whose Stand The World can stop time.

Jotaro encounters Nukesaku, who is a Vampire, but defeats him easily.[1] Meanwhile, Polnareff confronts DIO, who at last reveals his Stand, The World. DIO momentarily retreats when Jotaro, Kakyoin, and Joseph break through an outer wall and let sunlight enter.[2] Polnareff warns them about The World's power, and the Joestar group, after sensing an ambush, gets out of the mansion and splits into two groups. Evening has turned to night and DIO can roam free in Cairo.[3] He opts to pursue Kakyoin and Joseph who are trying to deduce The World's power. Kakyoin ambushes DIO with an Emerald Splash from all directions, but DIO's power is unleashed: he stops time and fatally punches Kakyoin through the stomach, sending him into a water tower.[4] Moments before his death, Kakyoin deduces that DIO can stop time and manages to transmit the message to Joseph by using his final Emerald Splash to target a clock tower. Joseph performs his 'secret technique' and runs away while deducing the meaning behind Kakyoin's ending attack.[5] Joseph then runs into Jotaro and tells him the secret of The World, as DIO stops time just to throw a knife at Joseph's throat. Joseph then loses consciousness as DIO taunts him about his rush to pass the secret of The World's ability to Jotaro. Jotaro grows exceedingly angry, as he does, and the fight between himself and DIO begins.[6]

DIO stops time but panics for a moment when he sees Jotaro's finger moving during the stopped time.[7] He figures that it is a bluff, but Jotaro only lured DIO into thinking that and Star Platinum manages to punch straight through DIO.[8] DIO heals and then stops time again, however, he is now throwing numerous knives from several directions, forcing Jotaro to spend the time he's allowed to move knocking away a number of knives.[9] Regardless, Jotaro is hit by the rest of the knives and subsequently tries to fake being dead. DIO, after incapacitating Polnareff who tried to ambush the Vampire, finally approaches Jotaro, who lands a hit on DIO's head.[10] The strike is more severe than DIO expects and he tries to flee, only for Jotaro to catch up and Star Platinum to pummel him away. However, DIO proclaims he's outsmarted Jotaro, as he lands near the fresh corpse of Joseph Joestar.[11]

DIO drains Joseph of his blood, completing his synchronization with Jonathan Joestar's body. Now fully empowered, DIO can stop time longer and seemingly finishes off Jotaro by crushing him under a steamroller.[12] Forthwith, Jotaro unlocks his own time-stopping ability and uses it to counteract The World: managing to defeat DIO once and for all by splitting him apart.[13] Jotaro then revives Joseph using DIO's blood with a transfusion. The Speedwagon Foundation brings DIO's corpse out into the desert, where Jotaro and Joseph reminisce their fallen allies as DIO's body turns to ash during the sunrise.

Holy Kujo awakens at last from her coma, now fully healed and excited for her family to be returning home. Meanwhile, Jotaro and Joseph make their goodbyes to Polnareff at the Cairo airport, parting wordlessly in deep friendship.[14]