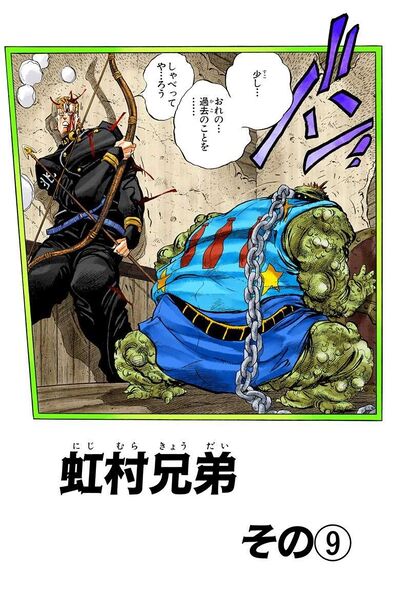 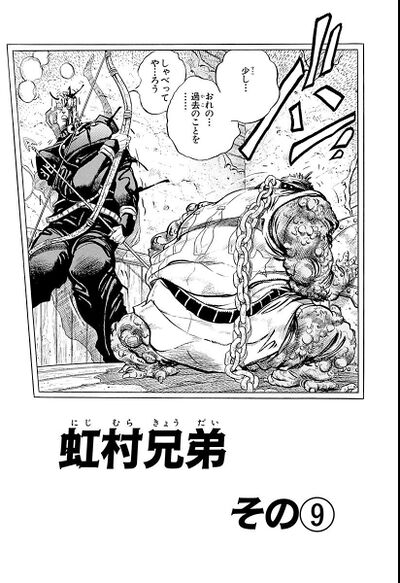 The Nijimura Brothers, Part 9 (虹村兄弟 その⑨, Nijimura Kyōdai Sono 9), originally The Spirit of DIO (DIOの亡霊, DIO no Bōrei) in the WSJ release, is the seventeenth chapter of Diamond is Unbreakable and the two hundred eighty-second chapter of the JoJo's Bizarre Adventure manga.

Keicho tells Josuke that ten years ago, in 1989, they were living in Tokyo during the economic down. Their mother had died two years earlier and their father would beat them regularly. One day they started to get lots of money and jewels in the mail. Keicho's father had sold his soul to DIO for money. DIO was looking for Stand users and Keicho's father had the potential. One day Keicho's father started growing huge boils on his face. This was what DIO did when he didn't trust someone- he implants his cells in them. After a year he had transformed into a monster and could no longer speak. Since then every day he has been rummaging through a box and then crying.

Keicho says that he hates his father, who sold his soul for money and hits him for rummaging through the box again. Josuke notices several scraps of paper and then restores the box into his original form. The scraps fit into a picture of the whole Nijimura family together- that was what Keicho's father has been looking for all these years. Josuke tells Keicho that instead of trying to kill him, he should try to heal him instead. Okuyasu is seen standing outside the room, crying.