Night has fallen on Cairo. Joseph and Kakyoin are pursued by DIO, but Kakyoin devises a plan to force DIO to reveal what exactly is The World's power.

Kakyoin and Joseph are forced to go to the roofs of Cairo to flee from DIO but Kakyoin has a plan to reveal The World's power. The two swing from rooftop to rooftop with the help of their respective Stands with DIO close behind.

Kakyoin's childhood was a sad and lonely one

Kakyoin reminisces his very lonely youth as he had no friends and his parents couldn't understand him, because he was unique with his Hierophant Green whom no one save him could see. However, he also remembers the Joestar Group and how they've become friends and comrades-in-arms sharing their unique power. Determined to make DIO reveal his power, Kakyoin plans to use Hierophant's original ability.

Hierophant Green turns itself into a 20-meter web system

While Jotaro and Polnareff find the car crash, DIO lands on a rooftop and sees Joseph and Kakyoin alone. He understands that his targets have split but his thoughts are interrupted by an unexpected Emerald Splash shot from below. When he jumps to avoid it, DIO triggers another string and is soon shot from several directions. In truth, Hierophant Green has deployed itself into a net of strings covering the entire area and trapping DIO within. Kakyoin reveals himself and plans to shoot DIO from all directions while Joseph observes but as the 20-meter Emerald Splash approach DIO, the Vampire summons The World. DIO disappears and Kakyoin is instantly sent flying into a water tank.

Agonizing, Kakyoin cannot move or talk and spares a thought for his parents back in Japan. However, he then thinks about how DIO ripped his barrier in an instant. DIO confronts Joseph and decides that his blood will be perfect to complete his healing. At the same time, Kakyoin finally understands DIO's power but cannot directly inform Joseph. Using the last of his strength, Kakyoin fires a final Emerald Splash into a nearby clock tower, destroying it. Joseph understands that there is a hidden message and Kakyoin finally expires.

Furious, Joseph ties DIO with Hermit Purple but the Vampire easily rips it apart. Fleeing again, Joseph tries to understand Kakyoin's hint and eventually realizes that Kakyoin has "stopped the clock". In truth, The World has stopped time, easily avoiding all the Emerald Splashes while making its way out of the barrier before delivering Kakyoin a fatal punch through the abdomen during the time stop. With this realization in mind, Joseph tries to think of a plan but DIO then disappears and reappears behind him. However, the Vampire refrains from attacking as Joseph has wrapped himself in Ripple-infused Hermit Purple. Moreover, Joseph sees that DIO cannot stop time for very long, but DIO remains supremely confident. Overpowering Joseph, DIO simply makes him fall into the streets.

Jotaro and DIO begin their battle

Joseph safely lands and then sees Jotaro, but as he tries to warn him about The World, DIO stops time. DIO reveals that he can only stop time for 5 seconds but expects this timeframe to expand when he eventually heals. Stopping himself from directly attacking Joseph, DIO instead throws a knife at his throat. When time resumes, Joseph is hit. Joseph collapses but still warns Jotaro to stay away and seemingly expires. Angered by this, as well as Kakyoin's death, Jotaro approaches DIO openly with the intent of beating him to a bloody pulp. Amused to see such recklessness, DIO decides to play with Jotaro and enters in a contest of strength between Star Platinum and The World, the two Stands begin to clash, demonstrating that they are physically even when they exchange flurries of punches. 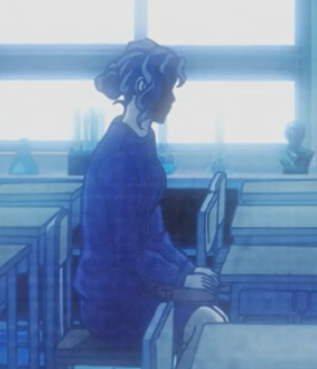 “
This episode begins exactly where the last one finished, with Kakyoin announcing that he's found a way to reveal the secret of DIO's Stand. We follow with a flashback scene, which is always a sign of a character's imminent death. (laughs)

Kakyoin is shown in primary school, with a cherry motif on the pocket of his shirt; it is one of Mr. Kato's personal touches, I think it was a good idea bringing a little originality.

Hierophant Green deploys his famous web and it is beautiful. At the start, the Stand didn't have this luminescent effect. We had added it afterward and it was an immediate hit for us.

Kakyoin's death was, of course, a great moment. I think you can say that this episode is mostly used to show DIO's might, as he's fearsome from beginning to end.

The precise moment where time stops is really cool. We could have just made it simple, with only an emanation of stopped time coming from DIO. But by testing image contraction effects, the sensory enjoyment was multiplied tenfold. It immediately pleased the special effect team, who didn't ask twice to perfect The World up to the version you know here.
”
—Naokatsu Tsuda, Blu-Ray limited edition commentaries