DIO finally appears to confront Polnareff. Although DIO reveals his Stand The World, its ability has yet to be decyphered and it is imperative for the heroes to deduce its power for them to have a chance of defeating the Vampire.

Polnareff is the first to confront DIO who is standing at the top of a staircase. The Vampire congratulates Polnareff for having made it this far from the Far East and having avenged his sister, then offers a "chance" for Polnareff to join him. Either he goes down two steps to signify his allegiance or ascends them to choose death. Polnareff naturally goes up to confront DIO but the latter surprisingly compliments him as Polnareff now finds himself down the stairs. Shocked, Polnareff tries to go up but is unable to, allowing DIO to psych him up by implying his subconscious fear of him. Polnareff understands that somehow, DIO's Stand, The World, is involved. 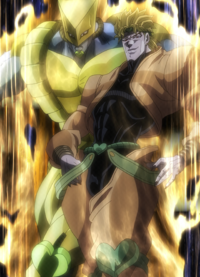 "You'll just have to die, Polnareff!"

Declaring that the ultimate goal of humanity is a peace of mind, DIO offers this "peace" if Polnareff serves him for eternity. Refusing to submit and willing to face death again until he uncovers his Stand's abilities, Polnareff summons Silver Chariot and DIO summons The World in response. However, Jotaro, Joseph and Kakyoin break through a wall and interrupt the incoming clash. Seeing the sunlight, DIO retreats in the shadows. Polnareff uses this reprieve to inform of one of the effects of The World but also informs them that Avdol and Iggy have died to save him. Kakyoin reminds the group that the sun is setting and thus they continue to go further in the mansion, with Nukesaku as their guide. The Vampire leads them to the top of the tower and they find a room with a coffin at its center. Taking some time to think about the stakes, the group surrounds the coffin and forces Nukesaku to open the coffin. Suddenly, Nukesaku is now inside the coffin and has been cut to pieces, taking everyone by surprise. Sensing trouble, the Joestar Group jumps out of the window and already understands that DIO's ability is extremely powerful. The sun is setting and DIO's hour of power is coming soon. While Joseph advises to retreat and let DIO pursue them to learn about his Stand but Polnareff wants to confront him. Thus the group splits in two: Joseph and Kakyoin will flee and try to harass DIO while Jotaro and Polnareff remain in hiding until they can pursue him.

DIO, standing atop the roof of his mansion

Night has fallen and Joseph purchases a truck to flee. Soon enough, DIO wanders in the streets and hijacks the limousine of a certain Wilson Phillips, an American senator. Intimidating Philips into driving the limousine and driving him mad by seemingly keeping him a prisoner of the car, DIO begins to pursue Joseph. Joseph feels DIO's presence too. When DIO gets stuck in a traffic jam, he orders Phillips to drive into the sidewalk and crush the civilians. Meanwhile, Jotaro and Polnareff manage to steal a motorbike.

The World suddenly appears in front of Hierophant Green

DIO catches up to Joseph's truck, allowing Kakyoin to summon Hierophant Green and attack him. DIO easily deflects the Emerald Splash and then summons The World, which sucker-punched Hierophant Green. Thankfully, Hierophant was out of range and is merely thrown away. Injured, Kakyoin still notes that The World is a close-range Stand with a reach of 10 meters and that it lacks projectile attacks. Still, DIO makes the truck crash when he throws Phillips at Joseph's truck. When the Vampire looks inside, Joseph and Kakyoin have already fled to the roofs of Cairo and Kakyoin has devised a plan to reveal the power of The World.

“
From now on, we enter the final battle. This episode begins on one of Polnareff's lines and it will be an onslaught of more or less famous lines.

DIO exudes an unbelievable charisma every time he appears. We really have the feeling it would be impossible to win against him.

For me, the one memorable scene will be the part with Wilson Phillips. Mr. Chô is the voice actor, and it is a somewhat strange performance that still fits the character and his vanity. The power of The World is extraordinary, but the senator's reaction makes the scene more comical than tense.

Kakyoin takes the lead and attacks DIO with his Emerald Splash. The scene also exposes the fervor of his spirit, you feel that he's eager to get his revenge. Nonetheless, he doesn't even manage to graze him and his attack is completely swept away.

All of this shows that Kakyoin has no chance against DIO even though he has a long-range Stand. If even Emerald Splash is ineffective, the range of tactics is largely restrained...
”
—Naokatsu Tsuda, Blu-Ray limited edition commentaries