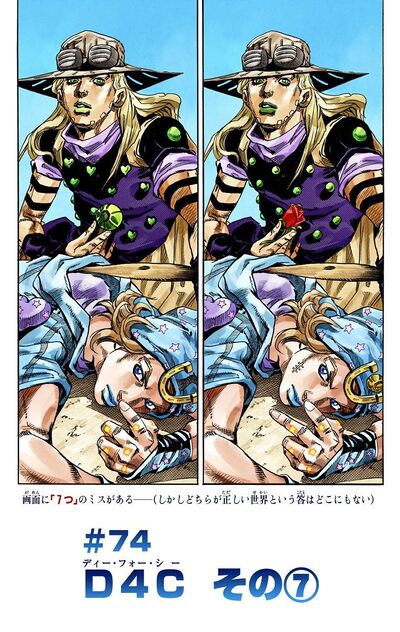 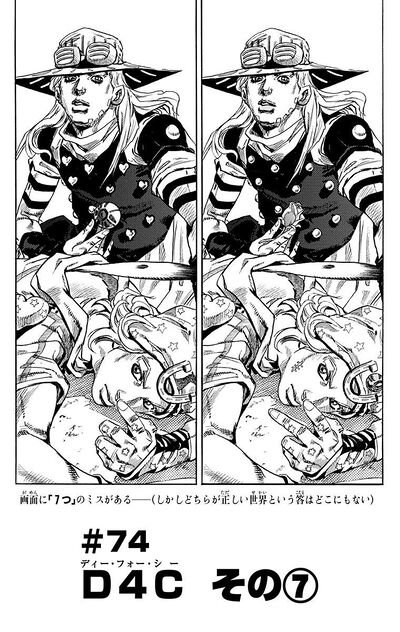 Lucy, also aboard the train along with an unconscious Steven, witnesses strange phenomenons happening around her, and she begins to transform into something else. Meanwhile, Diego and Hot Pants confront their alternate selves. Diego gets down his horse, advising Hot Pants to do the same. He Then throws one of his and Hot Pants' bills toward the alternate selves, which causes the bills to fuse and wound the alternate's legs. He then runs toward the train to board it.

The alternate Diego pursues him, and both Hot Pants fight. They blind each other, but the original Hot Pants uses her horse to unblind herself and run toward the train. She joins Diego but the alternate selves have also caught up. Diego confirms his theories about Valentine's power by slamming a door against the alternates, sending them back to their original universe. Johnny and Gyro observe the train from afar and see the battle that has just begun.

Author's Note
“
A friend of mine and their significant other appeared on Atsushi Watanabe's "House of Paradise". I'm almost certain they played their guitars on it."
”
—Hirohiko Araki
“
友人が渡辺篤史さんの「建もの探訪」に出演だって。きっと夫婦でギター弾かせられたな。
”
—Hirohiko Araki