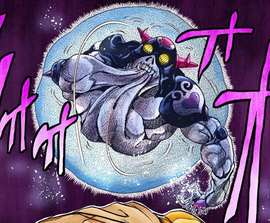 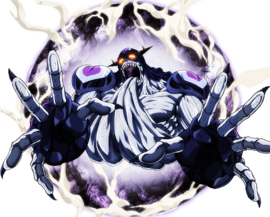 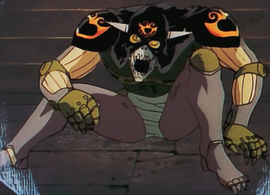 Destructive Power
B
Speed
B
Range
D
Stamina
C
Precision
C
Developmental Potential
D
A
B
C
D
E
A: Very Good
B: Good
C: Average
D: Poor
E: Very Poor
“
My mouth is a portal into a dark dimension. Even I ignore where it leads. I sent your friend in here... and you are next.
”
—Vanilla Ice explaining Cream to Polnareff, Chapter 240

Cream appears as an exceptionally tall, skull-faced humanoid monster with a mask akin to an executioner's cowl. Two protruding horns are also visible on the mask, and much like Atum and The World, has heart-shaped motifs on its body. When using its ability, Cream takes the form of a moving sphere of emptiness that cuts its way through any objects or people it passes through. This second form is actually a void made by Cream eating itself and Vanilla Ice, like an Ouroboros

Its design is based on common images of executioners and Death

, notably the concept of medieval French executioners cutting the heads off of the condemned.[2]

Because Cream functions as a portal that indiscriminately transports matter to another dimension, it has incredible offensive power because it can effectively disintegrate everything and cut clean through them. Only Vanilla Ice is shown to be unharmed when inside the void dimension[5] and can also undo Cream's self-devouring if needed.[6]

However, becoming a sphere has one major drawback. Although it is invisible, Vanilla Ice is also blind to his surroundings and must regularly take a peek, leaving himself briefly vulnerable to attack.[7]