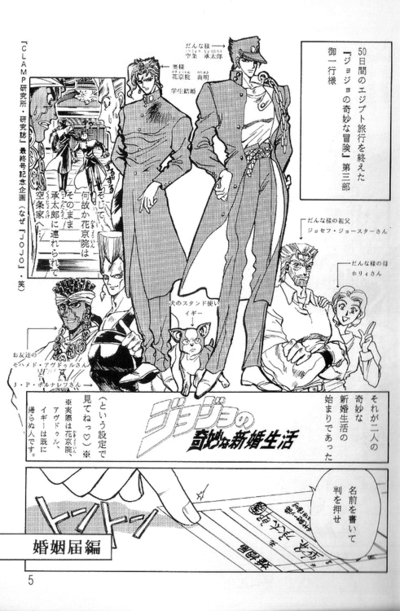 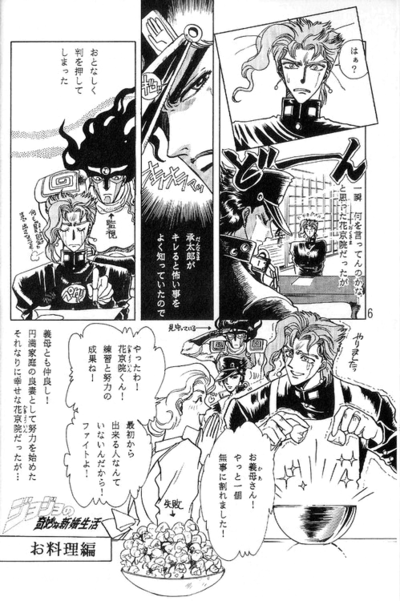 The story takes place after an alternate version of Stardust Crusaders where all the members of the Joestar Group have survived, DIO wasn't killed by Jotaro, and Holy has been cured of her fever despite DIO still being alive.

Kakyoin is brought back to the Kujo Mansion by Jotaro, who forces him to sign marriage documents. Thus, Kakyoin begins his life in the Kujo household as a housewife. He begins to practice cooking with Holy (now his stepmother) in order to become a good wife. After many failed attempts at cracking an egg, he eventually cracks one safely and Holy praises him for it.

Kakyoin makes breakfast for the other crusaders with Hierophant Green as his helper. Before anyone can start eating, DIO, now their neighbor, interrupts them with the intent of eating their breakfast for himself. DIO and Jotaro begin to fight over a piece of food, Jotaro demanding DIO let go of it, but DIO taunts him by saying he couldn't hear and asks if he'll take it by force. They call out their respective Stands The World and Star Platinum as the others look at their food. DIO stops time to eat all the food.

However, DIO becomes sicks and it is revealed that Kakyoin's food is actually terrible. Humourously, he experiences similar symptoms to when Jotaro caved in his skull.[2] Kakyoin is disheartened by this, lamenting that he woke up at 4 in the morning to make breakfast. Jotaro nonetheless begins to start eating his portion of food even if Avdol and Polnareff try to stop him. They plead that he shouldn't kill himself and that there's no need to go this far but Jotaro ignores them.

Jotaro eventually finishes all the food without becoming sick and tells Kakyoin they're going to school now. It's stated Kakyoin is a 2nd-year high school student, and Jotaro is a 3rd-year high school student. Since they both took 50 days off school, they ended up staying for another year. Avdol and Polnareff are surprised Jotaro ate the food, and Joseph mentions it must be due to love. The still-ill DIO insults Kakyoin, saying that out of all of the Joestar wives he's seen, Kakyoin has the worst cooking skills. Kakyoin launches an Emerald Splash at DIO before beating him up.