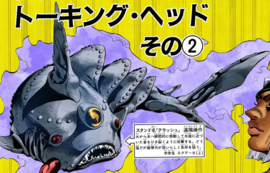 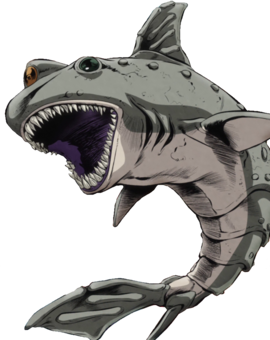 Clash (クラッシュ, Kurasshu) is the Stand of Squalo featured in Vento Aureo. Taking a form similar to a shark, it can teleport between bodies of water or other liquids in order to attack quickly and viciously; it can also grow or shrink to suit its current environment.

Its design is based on an Ostracoderm

In the colored manga, Clash is colored gray, while in the anime adaptation it is copper. In all media it is depicted with its lateral eyes being red and its medial eye being yellow.