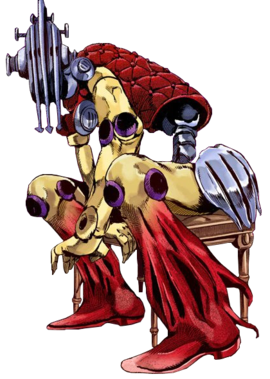 Civil War (シビル・ウォー, Shibiru Wō) is the Stand of Axl RO, featured in Steel Ball Run. It is a mechanical humanoid Stand that brings out everything and everyone that its victims can be said to have discarded, using them to bind said victims.

Civil War is embodied by a humanoid figure. Its head is relatively overwrought, composed of many vertical, elliptical discs pressed together, three of which taper below into arrow shapes; while three objects, resembling those housing the filters in a gas mask, emanate from the base of its neck at its front and sides. The head is designed with the appearance of a distorted metal mask in mind, with it being the focus of the Stand.[2]

A bare spine is visible from its ribcage to its pelvis, and its lower legs are shaped as fraying bell-bottoms. The legs were designed with the picture of plants, giving them a root-like appearance.[2]

Civil War generates ghosts of a sort, ranging in type from inanimate objects to humans with varying degrees of constitution and form, which could be considered part of it.

Civil War is red and yellow with silvery metallic parts in the colored manga.

Civil War has a mocking, arrogant personality, instilling guilt into people in order to manipulate them. However, it also shows fairness in battle, as shown when it told Gyro its own weakness in order to draw on its power to its fullest. It is unclear whether this is the stand's personality alone or if it was directly spoken by its user, Axl RO.

Civil War is a Stand with esoteric powers which relies on its control over people's guilt to attack them. Otherwise it doesn't show any combat capability of its own. Civil War is restrained to the closed space of the garbage dump in which Axl RO ambushes the protagonists although specters can pursue targets outside of the building.[3]

Civil War itself can avoid attacks by breaking apart into several pieces, and is shown to effectively nullify Gyro's Steel Ball attacks.[3] 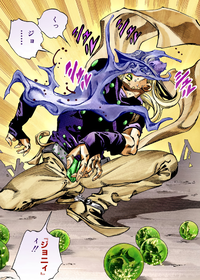 Civil War's primary ability is to manifest objects or person a target has left behind, given up, or feels guilt toward.[4]

The manifestations of objects and people can appear suddenly from anywhere, for instance, shadows or reflections in a mirror. These objects attach themselves to and move through the target's body, creating a thin membrane that slowly engulfs them[3][4] and the specters of people and animal likewise attack the target and try to fuse with them. Although a specter may also transform into the membrane, it can also physically harm its target.[5] The membrane then gradually shrinks until the target is crushed.[3] However, the target may survive the process, as did Hot Pants, who reappeared alive and well after being flattened by the membrane.

Once the target makes contact with the object, they instantly remember how and why they sacrificed it or feel guilty about it.[3] Axl RO is also able to directly command the specters inside the garbage dump to attack enemies or defend himself.[6]

The ability is very powerful and may result in the materialization of a great number of abandoned items or a large group of specters if the target is exceptionally guilty.[5]

Civil War's weakness is water, which dissolves the membrane. Axl RO explains that dousing oneself with water is akin to cleansing oneself from their guilt and sin, hence the neutralization of Civil War's guilt powers.[3] 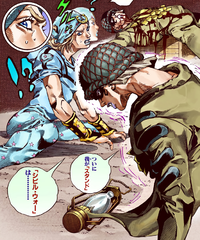 Axl RO is revived after Johnny's guilt over killing him

If Axl RO or anyone else inside Civil War's range is killed and their assailant feels the slightest guilt towards killing them, then the victim is brought back to life, and the guilt and sacrifices of the user manifest to attack the assailant.[5] The victim is revived in what Axl RO describes as a "purified" state with all their sins "absolved", as the murderer is transferred the burden of its victim's sins. Finally, the revived victim is invulnerable to the murderer's attack, as they persist because of the guilt their assailant feels.[6]

This ability is therefore easily exploitable by both Axl RO and any of his opponents.

On the other hand, someone can mortally wound a victim and escape the Stand's range before the victim expires or simply feel no guilt in order to bypass Civil War's power.[6]