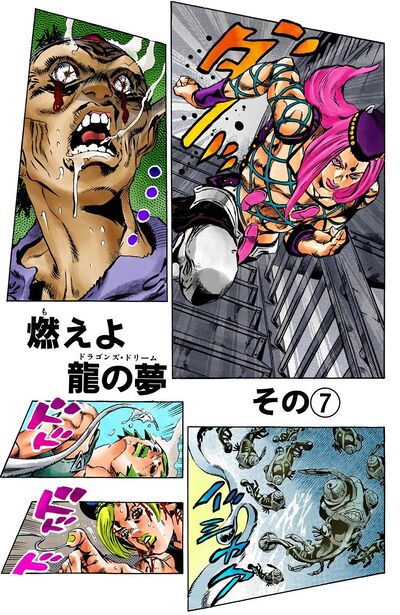 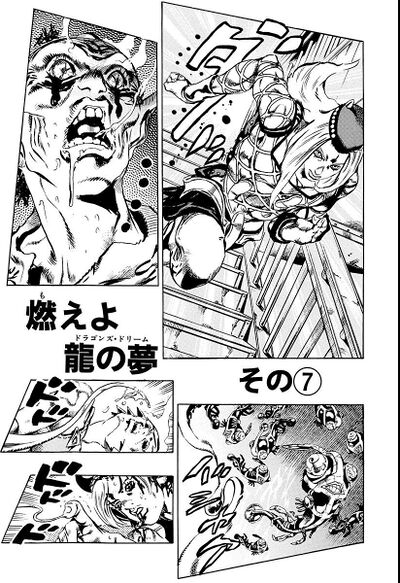 Enter the Dragon's Dream, Part 7 (燃えよ その⑦, Moe yo Doragonzu Dorīmu Sono 7), originally Moving Away! (離れる！, Hanareru!) in the WSJ release, is the seventy-fourth chapter of Stone Ocean and the six hundred sixty-eighth chapter of the JoJo's Bizarre Adventure manga.

Jolyne uses her string to return what remains of Foo Fighters she can find to Atroe's body. Kenzou charges at her, determined to end her with his feng shui assassination technique, but Jolyne's string enters Dragon's Dream. Kenzou sends his foot into Jolyne's mouth, but is sent upwards into a staircase.

As Kenzou hangs onto the railing, he asks his Stand why his last blow didn't finish off Jolyne and how he got up there as Anasui runs toward the old man. Kenzou asks Dragon's Dream where the lucky spot is, unaware that he let go of the railing. This causes him to fall and hit the ground, landing on his legs, which press down like a spring and launch him onto a nearby wall.

Dragon's Dream looks toward Jolyne and notices that Diver Down is imbued with her body, which Anasui reveals that he had stored within her; when Kenzou's foot struck Jolyne, Diver Down took apart his leg bones and put them back together in a spring formation. Kenzou's body slowly collapses, eventually landing in a bucket. Thanks to Anasui, Kenzou is forced out of commission.