From JoJo's Bizarre Encyclopedia - JoJo Wiki
Jump to navigation Jump to search
This page is a translated version of the page Bruford and the translation is 0% complete. 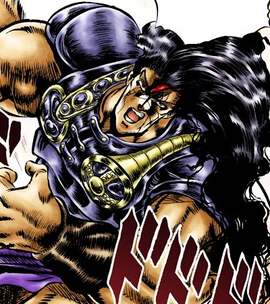 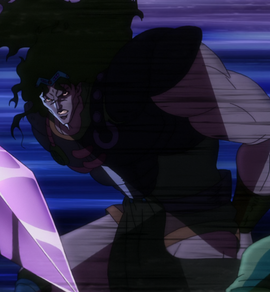 Phantom Blood (PS2 Game)
“
Heheh... this pain is proof of life. If you feel pain, you can feel joy. That's what humanity means.フフフ…この「痛み」こそ「生」のあかし この「痛み」あればこそ「喜び」も感じることができる これが人間か…
”
—Bruford to Jonathan, Chapter 30: Sleep as a Hero

Alive, Bruford was an honorable knight of Mary Stuart. His feelings toward her surpassed even that of love. When Elizabeth I betrayed Mary Stuart, Bruford stood by her side, fighting off all of Elizabeth's forces. Upon learning of her capture, he was easily willing to die for her. However, when the executioner showed him Mary Stuart's head, even though he accepted execution to save his liege, he goes into a blind rage and begins resenting humanity.

As a zombie, his hatred carried over, easily serving Dio in his quest for destruction. However, along with his hatred, his pride as a knight also carried over, deciding to fight Jonathan one on one.

After being defeated by Jonathan, the Ripple sent to him "frees his soul", allowing him to feel human again. He loses his hatred towards the world and is thankful for his chance to meet the honorable Jonathan.

As a knight, Bruford is supposedly a good fighter. It is stated that against the armies that fought against Mary Stuart, only Bruford and Tarkus could win. Already, Bruford had athletic abilities beyond ordinary humans. An expert swimmer, Bruford was capable of swimming a 5 km lake wearing armor with 30 kg of weight. He also managed to complete the 77 Rings challenge.

As a Zombie, his strength is multiplied and he can be seen scraping out a Zombie's nose with just his finger or swimming as fast as the Ripple can spread in water, allowing him to escape an attack with minimal damage.

Luck (, Rakku): Bruford's Sword. As a knight, he was fairly proficient in using swords, having defeated several people during the 77 Rings Challenge. When swung, the blade curves significantly to demonstrate its velocity. After being defeated as a zombie, he gave it to Jonathan and renamed it Luck and Pluck. 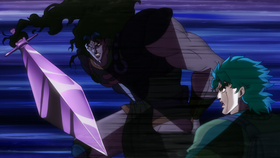 Danse Macabre Hair (, Dansu Makabu Heā, lit. "Death Hair Sword Dance"): Through unknown means, during his time alive Bruford had developed a technique that allowed him to use his hair in combat as a weapon. His hair acts much like a third arm, able to entwine things and be used as a distraction. His standard method of fighting consisted of using his hair first, and following with a thrust or kick from a blind angle. He was the only man not large in stature to surpass the 77 Rings Challenge due to this ability. After becoming a zombie, his hair amplified in power and was shown to able to lift around 105 kilograms with ease. This allows him to literally use it as a third arm and swing his sword with it. He is also able to expand it outwards at will to surround his enemies. The ability to do this comes from the phenomenon in plants called Turgor pressure

, a technique used to retain their rigidity. After piercing an enemy's skin with his hair, Bruford can also use turgidity to force blood through the strands of his hair, an alternate method of bloodsucking. 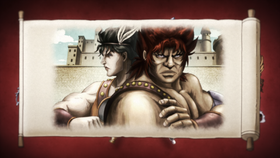 Born in the 16th century, Bruford was a member of the Tudor Dynasty

and a retainer of Mary Stuart. After losing his relatives in previous wars, young Bruford was brought up as Mary Stuart's knight and trained his body for that sole purpose. At the same time, Bruford became attached to Mary whose charm made him feel at peace. Alongside his fellow retainer Tarkus, Bruford passed the Challenge of the 77 Rings in 1563, being the only two out of five in history to succeed it.[3]

Soon, Mary was attacked by political rival Queen Elizabeth and a war ensued., Bruford and Tarkus fought the queen's army and they were the only ones who could win, but all of Stuart's allies were quickly defeated. Mary was eventually captured and Elizabeth offered Mary's release in return for Bruford and Tarkus' surrender. But on the day they were to executed as enemies of the crown, Bruford and Tarkus learned from their executioner that Mary had already been killed before they gave into the queen's demands. Bruford died expressing his undying hatred for Elizabeth and her family, rumors saying that his hair entangled the executioner's feet and killed him moments before being beheaded. The story of Bruford and Tarkus was passed down and became known to some, two such people being Jonathan Joestar and Dio Brando. 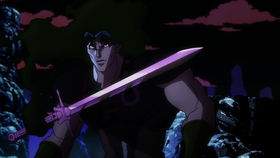 After taking residence in Windknight's Lot following his transition into a vampire, expressing a bit of sentimentality toward them, Dio resurrected Bruford and Tarkus as his zombie enforcers to deal with Jonathan, Will Anthonio Zeppeli, and Robert E. O. Speedwagon. Bruford's hair sucks Jonathan's blood, preventing him from conducting the Ripple through his affected arm but Jonathan simply uses his other fist to burn the hair with a flaming Ripple. When a Zombie interferes, Bruford kills him and asks Dio if he could be the one to take care of Jonathan, which Dio accepts. Bruford thus attacks, leaping while hiding his hands to trick Jonathan, instead drawing and wielding his sword "Luck" with his hair instead. To avoid the swing, Jonathan must duck and jump underwater, followed by Bruford. Surprisingly, Jonathan swims downward to find air bubbles beneath the rocks, enabling him to draw breath and indirectly hit Bruford with a Ripple Overdrive. However, Bruford rapidly swims to the surface to avoid the brunt of the attack.

Happy to face such an opponent, Bruford deploys his hair and ties up Jonathan, smashing him against a tree. Bruford draws his sword and attacks but Jonathan kicks the sword, conducting the Ripple into the Zombie's arm. Then, Jonathan violently pummels Bruford with the Sunlight Yellow Overdrive. 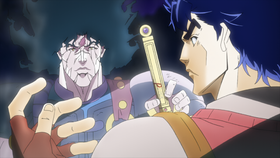 Once Jonathan made a direct hit on him after literally disarming him, Bruford regained his former humanity from the Ripple slowly destroying his body. Accepting his defeat with grace, noting he lost his hatred, Bruford only expressed only content to be reunited with Mary in the afterlife. After learning of Jonathan's name, Bruford gives the youth his sword, which he renamed Luck and Pluck, before he completely turned to ash. His armor and remains were kicked aside by a wrathful Tarkus as Jonathan was utterly conflicted over being forced to kill such a noble warrior regardless of being warped by Dio's evil. 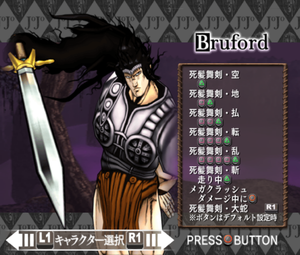 File:BrufordPS2.png
Bruford appears as a boss character in Chapters 13 and 14. In Chapter 13, the player plays as Jonathan Joestar and faces Bruford in an underwater battle. During the match, Jonathan is unable to charge Ripple naturally, and must stay near the air bubbles that dot the stage to charge his Stamina Meter: if the Stamina Meter completely depletes, Jonathan's health will begin draining. Bruford swims around the stage, and only approaches Jonathan in order to attack. If Jonathan lands an Overdrive move on Bruford, a unique cutscene will play showing Jonathan use Turquoise Blue Overdrive on Bruford, ending the battle.

Bruford appears in Diamond Records as a playable character in both the Action Battle and Tactical Battle game modes. He has one 'Courage' type 5 star statue. Bruford's moveset in both game modes is comprised of various attacks inspired by the anime using his sword, hair, and speed abilities. Despite being a zombie in canon, the game gives him the "vampire" tag and thus gives him the qualities of a vampire character (such as regeneration and weakness to the Ripple). Playing as him will force any outdoor stages into their night time variants.
Moveset

Bruford's basic attack string is a combination of up to five various attacks comprising of different strikes with his sword. In Tactical Battle, this is cut down to only three hits.

Bruford uses his hair to impale the opponent and deal multiple hits of damage.

Bruford disappears briefly, then reappears behind the nearest opponent to punch them from behind. (Unlockable)

Bruford jumps and does a strong spin attack with his sword, holding it with his hair.

Bruford jumps into the air and attacks with a barrage of strikes using his hair. (Unlockable)

Bruford starts the skill by striking the opponent with his hair, and cuts to the cutscene, where he picks up the sword and swings it towards the camera. Bruford hits the opponent with one strong and swift strike.