Break My Heart, Break Your Heart 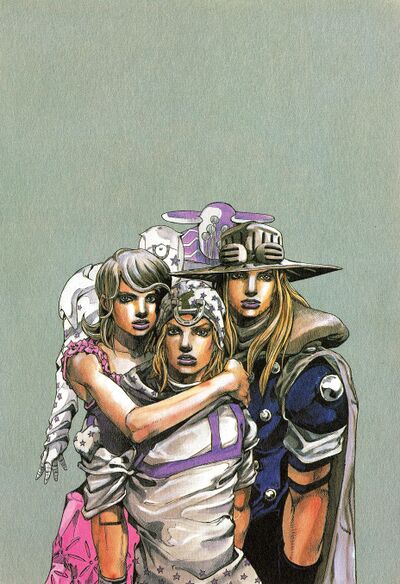 It narrates Johnny's final confrontation with Funny Valentine, who attempts to bargain with him.

The Saint's Corpse begins to extract itself from Lucy. Meanwhile Valentine proposes to bring back an alternate version of Gyro Zeppeli, to let everyone go unharmed and to never search to harm them in the future, in exchange for Johnny to shoot Valentine with an Infinite Rotation in the inverted sense, which would cancel the rotation of his body. Johnny retorts that the Gyro he knew and loved is dead, but Valentine responses that that fact is irrelevant, since what will matter is that Gyro Zeppeli walks in Johnny's world.

Valentine adds that his motives for gathering the Holy Corpse stems from patriotism, and that he wants to put the United States as the forefront of the world. This argument nearly convinces Johnny, who wants an insurance for Valentine's good faith; Valentine pulls out an alternate Cream Starter to heal everyone with. It works on Slow Dancer, and Valentine uses one last argument. He uses his father's handkerchief and vows upon it, using his deep love of his father to persuade Johnny of his good will. Johnny resonates with that last argument, thinking back that he and his father didn't love each other, and is convinced of Valentine's moral high ground.

Johnny nonetheless throws the gun Valentine emptied earlier back at him, daring him to pick it up as a test in order to see if Valentine isn't hiding an alternate revolver. Valentine's plans are foiled, he then suddenly attacks Johnny with both D4C and his own revolver. A final shootout ensues between the jockey and the President, which Johnny wins. Johnny Joestar witnesses a final apparition of Gyro's ghost and says his farewell. He then puts a final nail bullet in Valentine's head, killing him. The President's body is dragged underground by the Spin, and all traces of him disappears.[1]

(Mentioned only)
Ticket to Ride