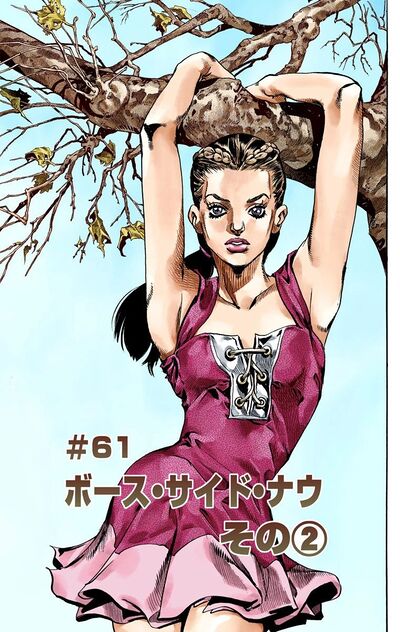 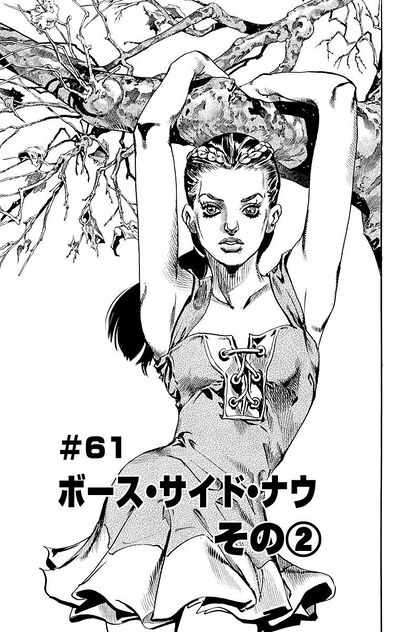 A flashback details the circumstances of Steven's wedding with Lucy.

Lucy was born in a family of farmers, but the father, having contracted debts to the Mafia, chose to sell Lucy to them. At the same time, Steven came to ask him Lucy's hand, and hearing that she was sold, proposed to masquerade having already taken her virginity and pay the Mafia to save her from a life of prostitution. Grateful for him, Lucy accepted to marry him and the Steel developed a deep yet platonic bond.

In the now, Valentine turns his head to look at the door leading into the room the Corpse has been hidden. Fortunately the Left Eye has slipped into it. However Valentine is suspicious and asks Lucy why she has been observing the room. Lucy diverts his attention by asking him why he has been following the Steel Ball Run race so closely. Valentine then explains that in order for be at the top of the hierarchy, it is crucial to have the respect of everyone. Thus at the end of the race he will obtain something that will make everyone across the Earth respect him and the United States. Enthusiastic, he locks the room and begins to act intimate, worrying Lucy. She tries to stab him with a knife, but Valentine stops it, having confirmed his suspicions about the traitor's whereabouts. Deciding to carry on his assault, he touches Lucy's second skin, shedding it and discovering Lucy's identity. Stunned, he cannot evade Lucy's stab in the throat and falls. However when a chair falls on him, he mysteriously disappears and reappears when Lucy flips it over, unscathed.