From JoJo's Bizarre Encyclopedia - JoJo Wiki
Jump to navigation Jump to search
This page is a translated version of the page Born This Way and the translation is 0% complete. 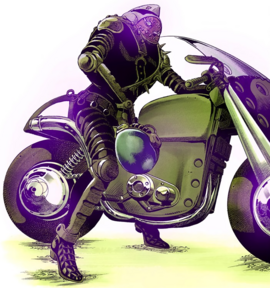 Destructive Power
C
Speed
B
Range
A
Persistence
A
Precision
E
Developmental Potential
E
A
B
C
D
E
A: Very Good
B: Good
C: Average
D: Poor
E: Very Poor
“
If something is closed and I open it, I'll be automatically pursued and attacked by that mysterious enemy rider...!
”
—Josuke Higashikata, JJL Chapter 15

Born This Way (ボーン・ディス・ウェイ, Bōn Disu Wei) is the Stand of Kei Nijimura, featured in the eighth part of JoJo's Bizarre Adventure, JoJolion. As a humanoid Stand on a motorcycle, it automatically pursues a designated target, appears near them when they "open" something, and conjures strong freezing winds.

Born This Way is composed of a humanoid rider and a motorcycle. The rider is covered by black clothes apparently similar to protective motorcyle clothing, including a visored helmet. As such, it is not easily identifiable as a Stand, but when its helmet is removed, it has a stout, robotic head and face, lending it the appearance of a hunched back. This was done in order to make it clear at first glance that it was definitely a Stand and not a human when its helmet came off.[1]

The motorcycle is a heavy, almost armored black sport bike

. The front wheels feature flower decals on the hub caps and the front fork has a stitched design similar to the face of the rider.

On the bottom of its helmet, there is a skull-shaped emblem, similar to those found on her brother's stand.

Born This Way and its motorcycle are primarily black in the colored manga. Underneath its helmet, Born This Way is also grey and purple.

Knocking the rider off the bike causes it to make a "Shuu" noise and quickly jump back on. 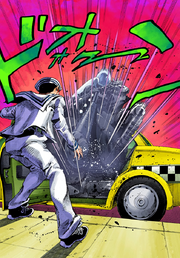 Born This Way summoned from the opening of a taxi door

When Born This Way appears, it can conjure powerful and cold gusts of wind to attack. The wind is strong enough to push back a grown man, and can violently displace objects.[2] Moreover, it is supernaturally cold. The temperature dramatically drops where it blows, to the point the eyes can begin to freeze.[3] If the wind persists long enough, a large quantity of snow may appear, and Born This Way can also propel shards of ice into someone as projectiles.[4]