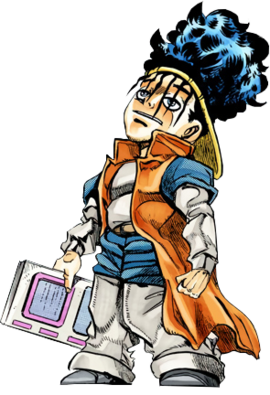 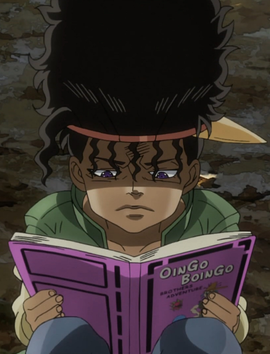 Boingo (ボインゴ) is a minor antagonist featured in the third part of JoJo's Bizarre Adventure, Stardust Crusaders. Introduced in the "'Khnum' Oingo and 'Tohth Boingo" story arc, he reappears during the "Hol Horse and Boingo" story arc.

Boingo is a young boy Stand User and his Stand is Tohth. As part of the Egypt 9 Glory Gods, he attempts to assassinate the Joestar Group in Egypt alongside his older brother Oingo and later Hol Horse.

Boingo is a young child of ordinary build, but his characteristics include an unusually large mouth and a large afro held together by a topless cap, leaving a few stray hair locks. His attire consists of a bright shirt and trousers over which he wears shorts and a jacket, plus a coat and simple shoes.

Boingo is very shy and content to take a supporting role in his partnership, using his Stand to guide his brother Oingo and then Hol Horse and then hide somewhere to observe. This passivity is also explained by the facts that Boingo is still a little child and that Tohth, being a mere book, is completely useless in a fight. Because of his shyness, Boingo is only comfortable around Oingo with whom he is close. After his encounters with the Joestar Group, Boingo seemingly learns from the experience and decides to become braver but, after Iggy attacks him, Boingo is then stated to have reverted back to his shyness. His timidity also causes him to stutter noticeably.

Despite his meekness, Boingo has great faith in his Stand Tohth, stating regularly that its predictions are always correct, however twisted they may be.

As one of DIO's servitors, Boingo demonstrates hints of evilness. For example, he grins and even awkwardly laughs when Tohth predicts that the heroes may die, and has no problem with mugging a man for his money. During his last appearance, Boingo expresses a wish to use his power for good so that people will love them more but this development is cut short when Iggy attacks him.

Boingo and his brother share a very close relationship, working as partners and relying on each other. Tohth's narration states for instance that Boingo feels lonely after being separated from Oingo. Moreover, Boingo accepts to partner up with Hol Horse to avenge his retired brother. 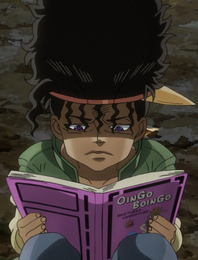 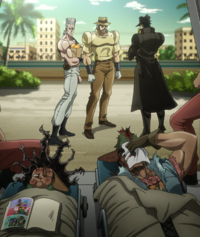