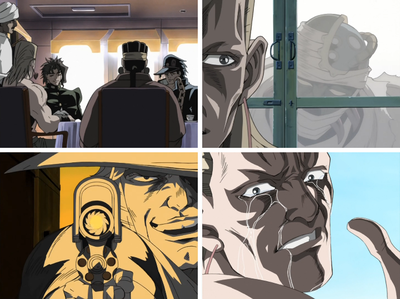 The Emperor and the Hanged Man (ADVENTURE4 皇帝と吊られた男, Adventure 4 Enperā to Hangudoman) is the fourth episode of the JoJo's Bizarre Adventure OVA. It adapts Chapter 140 through Chapter 142 of the manga.

The heroes have reached India, a stopover on the way to Egypt. Humorously, they suffer a bit from the culture shock with the filthy streets and the hordes of beggars and solicitors. The group rest at a café and Polnareff goes to the restroom. Looking inside a mirror, Polnareff spots The Hanged Man approaching him from inside the mirror and sees that it has two right hands. Polnareff realizes he's found Sherry's killer.

The Frenchman separates from the group to find his foe, frustrating Avdol who knows that Polnareff is heading to his death. The group is observed by another assassin, Hol Horse, who is in cahoots with J. Geil. Meeting with J.Geil, Hol Horse shows his gun Stand, Emperor, while Hanged Man cuts down a snake from inside the mirror. Meanwhile, the heroes worry about Polnareff and decide to look for him.

Eventually, Polnareff is lured into a trap set by The Hanged Man and Hol Horse. Stuck in a traffic jam, the heroes scatter to find Polnareff while Kakyoin guards their truck. Polnareff meets Hol Horse and they begin to fight after some banter. Emperor surprises Polnareff as it can control the trajectories of the bullets it shoots and the bullet evades Silver Chariot's sword to head for Polnareff's skull directly. Thankfully, Avdol shoves him aside before the bullet can reach him.

Hol Horse makes the bullet fly back at Avdol at the same time Kakyoin arrives. Avdol is confident and prepares to melt the bullet with Magician's Red. However, Hanged Man ambushes Avdol from one of the puddles on the street and stabs him in the back, allowing the bullet to hit Avdol in the head. Avdol is killed on the spot. Shocked, Polnareff tries to remain arrogant but Kakyoin realizes that the Frenchman is in tears.