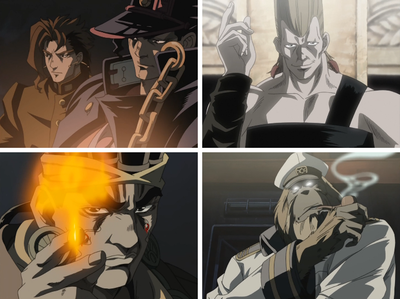 The private jet carrying Jotaro and his companions to Egypt suddenly bursts into flames. The plane is above the ocean and the crew is forced to perform an emergency water landing. The group now wait for a rescue party on their lifeboat and incidentally cross path with a large freighter.

The group boards the boat but finds no crew inside. However, Joseph feels that someone is following them. The heroes do find a orangutan in a cage and guess that someone must be taking care of him. Worryingly, the boat activates by itself and the mysterious captain of the boat still eludes the heroes. The group hears music and follow it, and eventually find a man having a feast and declaring that he's acquainted with DIO.

The man reveals his Stand Silver Chariot, presents himself as Jean Pierre Polnareff, and picks a fight with Avdol and his Magician's Red. After an exchange of boasts, Polnareff leads the heroes toward the upper deck to have a fight fair. Although Silver Chariot's speed is formidable and its armor protects it from the fire, Avdol guides his flames under the deck to perform an attack from below. Polnareff recognizes his defeat, pushing the heroes to spare him.

Suddenly, the ship comes alive and kills the pilots. The captain of the boat reveals himself as the ape from earlier, who manages to bind the entire group. Thankfully, Silver Chariot slices the orangutan in two. The freighter thus collapses and the group manage to retrieve a small boat. Polnareff eventually reveals that he's after the man who killed his sister Sherry, said man having two left hands. Learning that DIO does know the assassin, Polnareff figures that he'll tag along the heroes to find DIO again. Meanwhile, Enya reports her first failures but is confident that her son J. Geil's Stand, the Hanged Man, will prevail against the Joestar Group.