After losing track of Jotaro, N'Doul starts to panic, unknowing that his enemy is standing right behind him. After noticing the frightened sounds coming from Iggy, N'Doul surrounds himself with Geb, deducing that Jotaro is nearby. The two prepare for their standoff, and with their Stands suddenly attack one another. The faster Star Platinum hits first, the shock causing Geb to only hit Jotaro's hat. N'Doul falls back and begins coughing up blood, but Jotaro ensures him that it's not a fatal wound. However, N'Doul uses Geb one last time to strike his own head, causing a fatal wound. N'Doul tells Jotaro how he could never reveal anything to the group that would inconvenience DIO. N'Doul then reveals his lack of fear for death and his absolute devotion to DIO, stating that even evil needs a messiah

as well. As a parting gift for Jotaro, N'Doul tells him that his Stand is called Geb, and that it comes from the origin of the tarot, the Nine Egyptian Gods of Prosperity. In honor of the proud warrior, Jotaro buries him and creates a grave out of his walking stick. Jotaro tells Iggy that he will forgive his poor attitude, as he can understand not wanting to fight a stupid war in the middle of the desert. As he does this Iggy angrily walks away, returning with Jotaro's hat in his mouth. The dog returns the hat that was knocked off during the fight, along with a little present stuck to the rim. 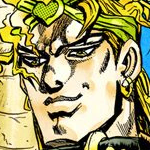